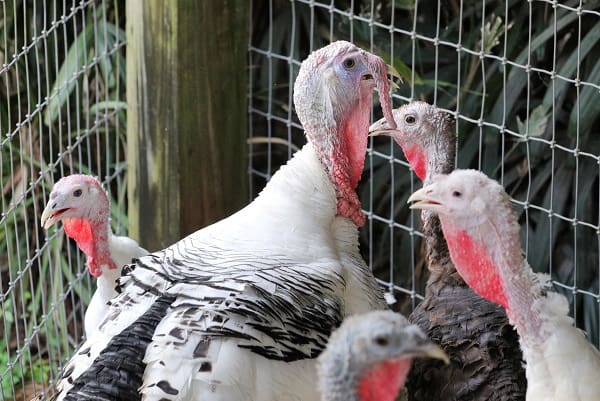 In the UK’s largest ever outbreak, the Animal & Plant Health Agency (APHA) are reporting new cases in captive birds almost daily. Since late October, 40 premises have been infected and over half a million captive birds have been culled. By comparison, there were 26 outbreaks in the UK during the entire winter last year. An Avian Influenza Prevention Zone (AIPZ), including strict biosecurity measures, came into force across Great Britain at the start of November and towards the end of the month was extended to require all birds to be kept indoors.

The poultry industry likes to blame the spread of bird flu on migratory birds. So far this winter, almost 300 wild birds have been found with the disease at more than 80 locations.

Senior public health expert at the World Health Organization (WHO), David Nabarro, warned that should it mutate and become more transmissible, a pandemic caused by H5N1 could result in a death rate of anywhere between five and 150 million people.

Writing in the journal Emerging Infectious Diseases scientists said, “If this virus acquires human-to-human transmissibility with its present fatality rate of 50 per cent, the resulting pandemic would be akin to a global tsunami. If it killed those infected at even a fraction of this rate, the results would be catastrophic.”

Juliet Gellatley, founder and director of Viva! said, “The real problem is factory farming. Whilst wild birds undoubtedly contribute to the local spread of the virus in the wild, it is human commercial activities particularly those associated with poultry, that are the major factors responsible for the global spread of bird flu.

“Large, industrial sized units, housing tens of thousands of birds, provide the ideal environment for infectious diseases to spread and mutate. Viva! have been into these hellholes and exposed the horrific conditions these birds are forced to endure during their short lives.

“Over one billion chickens are slaughtered for their meat in the UK every year and around 95 per cent are intensively reared on factory farms. There are 24 billion chickens in the world – more than three birds for every single person on the planet. Whichever way you look at it, domesticated poultry are massively over-represented among the world’s bird population.”

The rate of spread in the UK is expected to continue but no one knows why it’s getting worse each winter. Speaking on BBC Radio 4’s Today programme Chief Veterinary Officer of the UK, Christine Middlemiss, said: “I am very concerned about what’s happening” as the disease continues to hit more poultry farms and bird sanctuaries.

Avian influenza viruses are among the most dangerous viruses that can affect humans. In people, H5N1 has a case fatality rate of around 50 per cent. Seasonal flu kills around 0.1 per cent (one in 1,000) of those infected. Luckily, H5N1 is not easily caught or spread between humans, yet! There have been a handful of person-to-person infections among families caring for sick relatives and scientists are concerned. We’ve all seen how viruses mutate – the Omicron variant of the SARS-CoV-2 virus, for example, is much more transmissible than the Delta variant.

It’s not too late for snap Easter return to mandatory...

NHS calls for immediate return of Covid restrictions as ‘this...