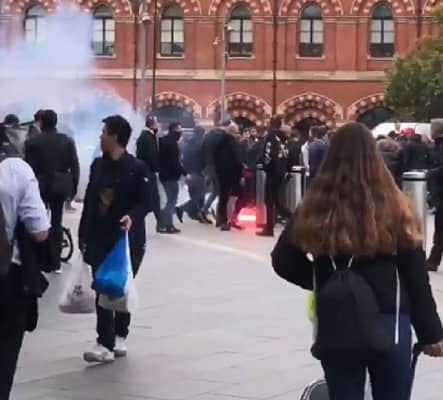 King’s Cross station was shut down on Thursday afternoon after football fans let off flares and smoke bombs.

Belgian side Standard Liege are playing Arsenal tonight at the Emirates Stadium in the UEFA Europa League this evening.

British Transport Police were called to the station around 1.30pm as “large numbers” of football fans were letting flares and chanting.

Transport for London said the behaviour was “reckless and dangerous” and said, “We are lucky nobody was seriously injured.”

A TfL spokesperson added, “The safety of our staff and customers is our top priority. Behaviour like this is reckless and dangerous and we are lucky nobody was seriously injured.

“We thank our staff for acting quickly and calmly to evacuate the station alongside the police responding to this incident.”

“The station has been closed while the London Fire Brigade respond, and the football fans are being dispersed by officers.”

Ukraine captures the ‘most advanced Russian main battle tank’ the...

Former British diplomat told Putin ‘to stay away’ from Queen’s...