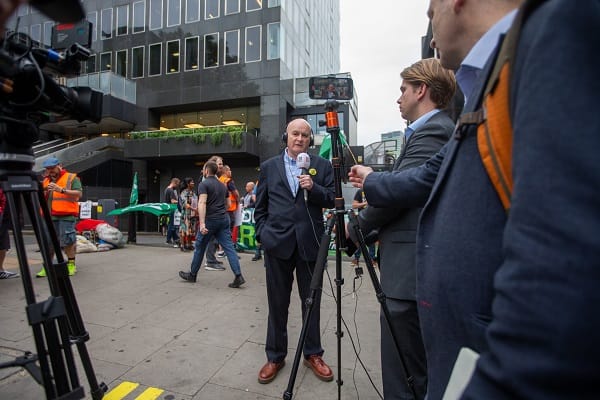 A union leader has predicted that the government’s plans for a new anti-strike law will start a “mass movement” of resistance in response to the “pernicious attack on the rights of working people to defend their jobs.”

The government want to introduce a Bill in response to the wave of strikes hitting the UK for many months over disputes in pay and job conditions.

On Monday there will be a demonstration held by Downing Street in response to the second reading of the proposed legislation in the House of Commons.

The Rail, Maritime and Transport general secretary warned that the anti-worker law will make it effectively “illegal” to take strike action in the UK.

Mick Lynch said, “The Government has decided to bring in this anti-worker law because it wants to make effective strike action illegal in Britain.

“Trades unionists and democrats from across the political spectrum must come together in the interests of civil liberties and human rights to oppose these measures.

“This violation of democratic norms and values will be strongly opposed by the RMT and the entire labour movement, in Parliament, the courts and the workplace, if it is put on the statute books.”

Fire Brigades Union general secretary Matt Wrack said, “The protest at Downing Street is the start of a mass movement of resistance to this pernicious attack on the rights of working people to defend their jobs, wages and conditions against attacks from their bosses or cutbacks from the Government.

“The Prime Minister is seeking to steamroller extremely severe restrictions on the right to strike through Parliament today, without any meaningful scrutiny.

“Firefighters and other key workers, who kept our public services going during Covid, are at Downing Street, to tell Rishi Sunak that they will not accept this dictatorial assault on their democratic rights

“Instead of launching draconian attacks on the rights of working people, the Prime Minister must provide the resources to resolve this dispute by paying firefighters and other workers a decent wage, to alleviate in-work poverty.”