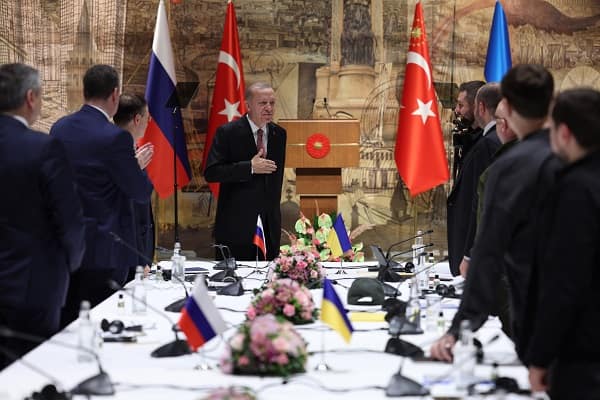 Erdogan is hopeful that talks between Vladimir Putan and Volodymyr Zelensky could take place in person and that Turkey are ready to host negotiations between Russia and Ukraine.

Erdogan was quoted as saying by Daily Sabah, “The progress made in these talks will allow the leaders of Russia and Ukraine to negotiate in person.”

Erdogan said that they are “deeply concerned” over the situation around Ukraine and are calling for an immediate ceasefire.

“The negotiation process between Russia and Ukraine has raised hopes for peace. Ensuring a ceasefire as soon as possible would be beneficial to all parties,” the Turkish president said.

He added, “We hope that the meetings [in Istanbul] will benefit both sides and the region.”

“I think it is possible to come to an agreement that will suit both sides and the world community,” he stressed.

Erdogan noted that a “permanent, fair, practical solution is required.”

Erdogan also stressed that Turkey is ready to perform mediation functions for as long as necessary.

The Turkish President said, addressing the Russian and Ukrainian delegations, “We are ready to help the peace process as much as you need.”

The negotiations have now ended and it will be sometime before anything is known as to what was discussed.