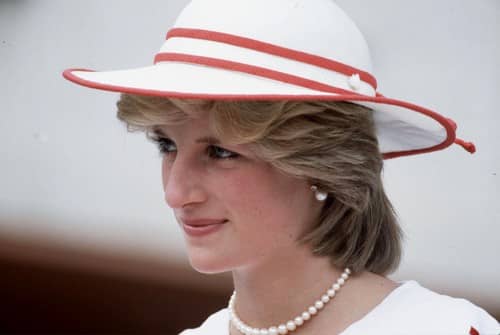 Season four of The Crown has been met with a rapturous response from critics and viewers alike, and with this series tracking the engagement and tempestuous marriage of Prince Charles and Princess Diana, it’s no surprise that interest in the People’s Princess has surged once again. Diana certainly didn’t have a conventional role within the Royal Family, and despite her tragically short life, her legacy has had a huge impact on British society.

Along with her kindness, grace, charisma and activism, she is also remembered for her unmistakable style and glamour. Perhaps the most enduring symbol of this is her sapphire engagement ring, which is now worn by Kate Middleton, and was recently voted the world’s most popular engagement ring. The now-iconic piece has a 12-carat oval blue Ceylon sapphire surrounded by 14 solitaire diamonds, set in an 18-karat white gold band. Even though her marriage to Prince Charles didn’t last, Diana continued to wear the ring after their separation. And not only is it one of the most widely imitated pieces of jewelry ever, but it also has a fascinating history.

As well as being a bold and beautiful design, Diana’s engagement ring is particularly special as she chose it herself. After she accepted Charles’s proposal in 1981, he picked a selection of rings from Garrard (the then crown jeweler), and let her claim her favorite. It’s said that Charles included the now-iconic sapphire ring due to its similarity to the brooch Prince Albert gifted Queen Victoria in 1840, which Queen Elizabeth II has worn on several occasions.

“It was said to be a strong influence on Prince Charles when he came to Garrard to purchase a ring for Lady Diana,” Sara Prentice, Garrard’s current creative director, explains to Vogue. “I would imagine growing up being surrounded by your mother and your grandmother [with] such beautiful, incredible jewelry…it would stick with you.”

Diana loved it, and there are a variety of reported reasons for this, including its resemblance to her mother’s engagement ring, the fact that it matched her eyes, or simply that it was the biggest. Nobody knows exactly why she was drawn to this particular piece, but sapphires continue to be a popular choice with brides-to-be, and not just in Diana’s deep blue. “In fact, they’re available in a rainbow of exciting color choices,” jewelers Taylor & Hart point out. “From rich dark indigo blue to fresh, vibrant ocean spray blue, to black, white (colourless), orange, brown, champagne, peach and even green.”

The ring allegedly caused controversy within the Royal Family

The ring may be stunning, but some members of the Royal Family allegedly weren’t too happy with Diana’s choice. Vogue claims that some were displeased that the ring was not a one-of-a-kind design — anybody could buy the same one from Garrard. In another feature for the fashion publication, The Crown’s head of research, Annie Sulzberger, says the Queen was apparently unsettled by its high cost. The Netflix series reenacts the moment Diana makes her choice, with tension appearing as she passes over a Burmese ruby which already belonged to the Royal Family. A conservative estimate suggests that Diana’s engagement ring cost around £28,500 at the time, a staggering £123,000 today.

In spite of the supposed backlash, jewelry historian and author Vivienne Becker added that Diana’s decision was actually rather conventional in some ways. “It was totally in tune with her style, she was the ultimate Sloane Ranger at the time,” she explained, noting that high jewelry in the 1980s “was virtually all the three big gemstones (sapphire, ruby and emerald) framed by clusters of diamonds”. Classic designs were the way to go as such jewelry was incredibly expensive, and intended to be passed through generations.

Kate Middleton now wears the ring, despite it being left to Harry

Diana’s ring has been worn by Kate Middleton since her 2010 engagement to Prince William. Upon their return from Kenya, where William proposed, he told ITV: “It’s my mother’s engagement ring and it’s very special to me, as Kate is very special to me now as well. It was only right the two were put together. It was my way of making sure mother didn’t miss out on today and the excitement and the fact that we’re going to spend the rest of our lives together.” However, the ring was reportedly left to William’s brother Harry instead.

According to Paul Burrell, Diana’s former butler, William decided to keep his mother’s gold Cartier watch, while Harry chose her engagement ring. “[Harry said] I remember when I held mummy’s hand when I was a small boy and that ring always hurt me because it was so big,” Burrell recalls in the 2017 Amazon Prime documentary The Diana Story. “So I went to the safe and gave Harry Diana’s engagement ring.”

So how did it end up in William’s possession

Burrell claims that Harry offered to swap heirlooms when his older brother told him he was going to propose to Kate — “Harry said to him: ‘Wouldn’t it be fitting if she had mummy’s ring? Then one day that ring will be sat on the throne of England.’” Though according to a Daily Mirror source: “They had an agreement that whoever got engaged first would have Diana’s ring – and of course that was William and Kate.”

However, Kate allegedly needed to modify Diana’s iconic ring before she could wear it. Following her and William’s engagement, Kate reportedly resized the ring for a better fit, asking royal jewelers G. Collins and Sons to place two platinum beads called ‘speed bumps’ inside the band. And as William is second in line to the throne, Diana’s spectacular engagement ring will indeed have a place at the top of the monarchy one day