Home Business Insights & Advice Should you let your employees work from home? 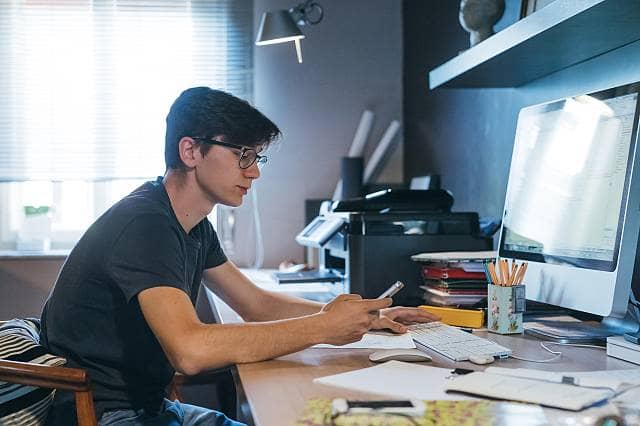 Should you let your employees work from home?

Once upon a time, getting a big city job in London meant moving into an expensive apartment in the heart of a city, forcing yourself into immaculate business clothing in the early hours of the morning, and relying on the tube service to ensure you got to the office on time. If you didn’t, your day was already ruined before it started.

Thanks to advances in technology, that doesn’t have to be the case anymore. Many jobs – and office jobs in particular – can be done at home with staff working from a computer and a telephone. There’s no physical need for them to be in the office anymore – it’s just that many businesses haven’t adapted to this fact, and think it’s still best practice to keep employees in the same physical space as their managers so they can keep a tight watch over their productivity. This doesn’t have to be the case.

We understand the reluctance that some companies have to allow staff to work from home. It involves a lot of trust – you’re relying on your staff to focus on the task in hand, and not spend their time watching TV, browsing the internet, or heading out with their friends. After all, how do you know they’re not spending their entire working day logged into Facebook? How do you know that they’re not whiling away the hours – and the money you pay them – mobile slots websites, indulging a gambling habit? If you step back for a moment though, such suspicions say more about you than your employee. If you think so little of your staff that you believe they’d spend their working day spinning the reels on slot games, then it sounds more likely that the biggest gamble involved was you deciding to employ them when you have such doubts about their professionalism!

The majority of workers know how to separate their work time from their leisure time – even when nobody’s watching them. They can indulge their social media or online slots habits as much as they like in their own time – just as they probably do now. If you give them a little trust and freedom, you may find that their productivity increases instead of decreases. Here’s why.

Every employer and employee has run up against this problem at least once. Staff are expected to be at the office by a certain time. That member of staff relies on public transport or their car to get to the office. Transport issues are frequent with both options – and especially so in London. This can lead to angry managers and stressed workers. That isn’t conducive to good working practices, or productive days. To make matters worse, employers will sometimes urge their staff to get up earlier and set off earlier, which extends their working day – with no gain to them – and frequently leads to disputes.

A member of staff working from home has no such issues. They just have to get up, get dressed, and sit down at their home office to start work. They’re probably better rested, because they didn’t need to get up as early. They’re less stressed, because they haven’t had a hectic journey into work. That improves their mindset, and makes them more productive. Have them telephone the office at an agreed time to confirm they’re in position, and everybody is happy.

It’s cheaper for you

This is just about basic maths. The more staff you have, the larger your office needs to be. The larger your office needs to be, the more you’ll be paying in rent or loan costs, and all the other fees and costs that go along with it. More electricity. More water. If you provide catering, your costs for doing so will be forever increasing, too. But what if you could add to your workforce without ever having to move to a larger office again?

Many large companies are now hiring people specifically to work from home, and therefore keeping their overheads down by doing so. Some of the names may surprise you- we’re talking about companies as big as Vodafone. If one of the largest telecoms companies in the world thinks it’s a good idea to allow staff some flexibility, chances are it would be good for your business, too.

It’s less distracting for your staff

This sounds counter-intuitive, but there are probably fewer distractions in a home office for your employees than there are in your physical office. Granted, you have no idea whether your employee has the television on at home, or has a few of their favorite websites open in browser tabs, but if we’re honest, most employees browse the web at work from time to time anyway. You probably even do it yourself. The major distraction in an office is – and always has been – other people.

Offices are famous for their workplace dramas. There are arguments. There are secret relationships. There are extended conversations about what everybody watched last night on television. If you have several football fans in your office, you already know how long sports debates go on for. All of that is chewing into time that should be spent more productively. Every time an employee gets distracted by a colleague wanting a chat, it breaks their focus. They don’t just lose the time that they spend talking; they also lose the time it takes them to focus back in on the task in hand, and resume their work. By that time, the phone may have rung, someone’s called for a meeting, or some other distraction has appeared. None of this would happen if they were at home.

There are, of course, times when it’s desirable to have your staff in the office. It would be foolhardy to send all your staff home and never see them again. Realistically, though, it’s probably more desirable to have your staff come to the office two or three days a week, and then spend the rest of their time working from home. If you’re willing to give it a try, you may be surprised by how quickly productivity within your company improves. If it doesn’t work, the solution is simple – just bring the member of staff back into the office first time, and carry on working the way you were previously.

If you’ve been holding off on flexible working because of outdated ideas on how staff should be organized and supervised, ask yourself one question: What do you have to lose by trying?