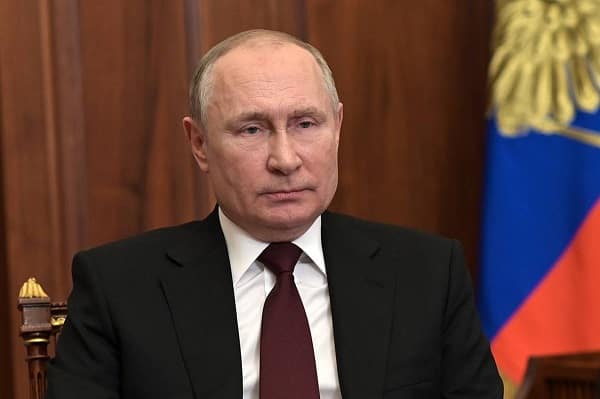 The Russian President Vladimir Putin has strengthened his grip around Russian’s necks and will put anyone in prison who spreads “false information” about the Ukraine war and the Russian armed forces.

This will largely target Russian journalists and they will be fined or sent to jail or both if they are found to have “intentionally” spread “false information.”

Moscow is restraining freedom of speech after the Russian Duma passed the new legislation.

In 2021 Putin passed a new legislation against “foreign agents” in Russia to target journalists and what they deem to be activists if they speak out.

If anyone spreads what the Kremlin deems to be “false information” over Russian troops in Ukraine will face up to three years in prison – Western media and civilians are therefore doomed!

If the false information is published as part of an “organised group” or uses “false evidence,” the maximum sentence increases to 10 years in prison.

Should this lead to what the Kremlin believes is “serious consequences,” the perpetrators will face up to 15 years in prison.

Ivan Urgant who is a night-time talk show host on Channel One, posted “Fear and pain. NO TO WAR” on instagram, he has not been seen since.

Radio Liberty and Meduza news outlets were also blocked, according to the state-owned RIA news agency.

The BBC has since responded to this news and have pledged to continue efforts to make sure people in Russia have access to its news output.

A spokesman said, “Access to accurate, independent information is a fundamental human right which should not be denied to the people of Russia, millions of whom rely on BBC News every week.

“We will continue our efforts to make BBC News available in Russia, and across the rest of the world.”

A journalist from the TV station “Zvezda” (the Russian armed forces’ channel) said, “We’re used to being in war zones, plus we always travel with the military, so it’s relatively safe. But this time it was horrendous.”

Another journalist at the Russian Television and Broadcasting Company said that they are intentionally not following what is happening in Ukraine.

They said, “I try to not think about it. I really don’t understand what’s going on there and I don’t want to understand.

“They tell us that Putin had no choice and I try to believe that.”