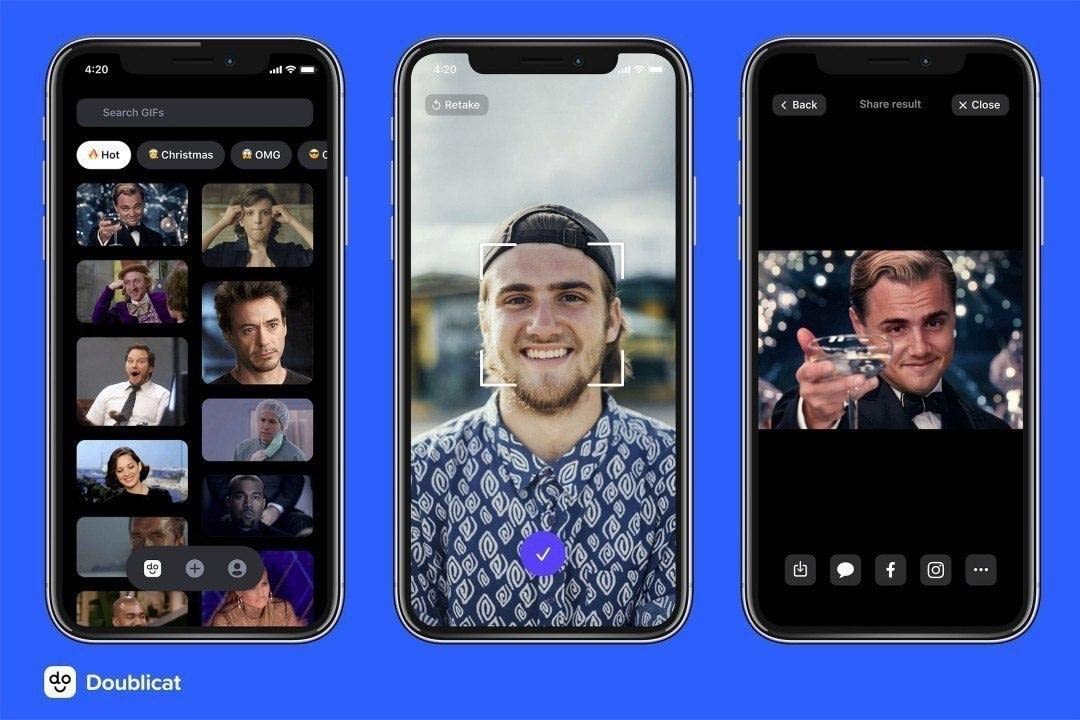 The Doublicat app that allows users to replace faces on GIF-images was created by Ukrainian developers RefaceAI, and now it is gaining popularity all over the world. The company investor Sergey Tokarev told that in July, the app reached the 5 million mark of downloads and topped AppStore and GooglePlay charts in several countries.

Becoming a popular athlete, actor, movie character or president of the US

The Doublicat app allows users to choose between thousands of GIF-images compiled in categories, such as movies, emotions, reactions, actions and other parameters.

Available character faces on GIF-images may be replaced with a user’s selfie or any other face. This way, it is possible to make any person a singer from a music video, a superhero, a prominent politician or whoever they want. The basic app version is free, but there is a premium version as well. It allows to download user’s photos and GIFs and also remove the watermark from ready-made GIF-images.

According to Sergey Tokarev, Doublicat has been intensively going straight to the top since the very launch. In the first two months after its official release on January 13, 2020, it had been downloaded by more than 750,000 users. A month later, in May, the number went over a million. Since then, the progress speeded up and in less than two more months, the app had been downloaded by another 4 million users.

In early July, Sergey Tokarev announced that in Ukraine the app had outpaced the most downloaded apps, such as Privatbank and TikTok. The latter app has been beaten by Doublicat not only in Ukraine, but also in Thailand and the Philippines. On July 6, the app broke into tops of AppStore charts in Europe. In particular, it was among the TOP-10 best entertainment apps in Italy. On July 28, Doublicat is ranked 17th in the most popular apps in the Appstore Entertainment category and 13th in the same category on GooglePlay in the United States. The app is also highly popular in Malaysia, Brunei, Kazakhstan, and Kyrgyzstan.

RefaceAI attributes the success to a number of factors

First of all, the app uniqueness matters the most. Unlike most companies that work with CGI technology (computer-generated imagery) or 3D modeling, RefaceAl uses exclusively artificial intelligence to replace faces. This technology is GAN (Generative Adversarial Nets) which is based on the machine learning algorithm and was developed by the company.

Here comes the second advantage – the quality. Since the app uses the latest self-learning AI software instead of just «stretching» one image on top of another as a mask, the ready-made GIFs are maximum realistic.

And thirdly, showbiz celebrities also boost the app popularity. Jerry Heil, a famous Ukrainian blogger, author and singer, has released a music video “Blogger” that was made by using the RefaceAl technology. In the first few hours after its release, the video was watched by more than 30,000 people. Another Ukrainian singer Olga Polyakova has used the app as well. She “tried on” her face to the video of another performer Tina Carol and posted the experiment results on Instagram.

The similar way, just over a year ago, Reflect, another RefaceAI app that allows to change faces on photos, got its popularity. In 2019, the app got the attention of Elon Musk.

‘He used Reflect to swap faces with Dwayne Johnson. Musk posted the result on his Twitter account,’ tells Sergey Tokarev. ‘After that, the number of downloads increased intensively. Moreover, Musk’s post launched a chain reaction in the media around the world, and that, in its turn, helped to popularize Doublicat.

The RefaceAl company was founded back in 2011. The first name of the developer team was NeoCortex. At that time, the developers worked on improving the existing machine learning methods. Once they gained the experience, the developers moved to a completely new level and started working on their own AI-based algorithm of replacing faces on photos and videos. The effort resulted in the RefaceAl technology, which later gave the new name to the company.

‘The way of the company to the face replacement on GIF-images has been long, difficult and involved several stages. The most important and the longest stage was the RefaceAl technology development. That was what became the framework of the start-up identity. It took us more than three years. Then, the team started working on the Reflect app development in order to replace faces on photos. The process lasted about half a year. We released the app last year, and then during the whole following year, we were working on improving the technology so that faces could be changed not only on photos, but on videos as well. The work ended up with the development of Dublicat that works with GIF-animation,’ tells Sergey Tokarev.

In Appstore Doublicat has a pretty high rating: 4.9 out of 5. Among its main advantages, there are high realism degree, image creation speed, UX\UI design, as well as a lack of need for registration. By contrast, faces generated by the Morphine app look no longer «human-like» and become completely “computer-designed” so it is difficult to recognize a person. Another similar popular application Faces does not even try to create a realistic image. Your face, roughly cut and embedded in GIFs, remains in 2D format. The Gif You app works a little bit more carefully and has a more structured database of images, but an uploaded face also remains static. If a GIF hero opens their mouth, black rectangles appear between their lips on the edited picture, and that looks rather poor. And if you compare all these parameters, the popularity of Doublicat no longer looks so extraordinary.

There are no limits to perfection

RefaceAI is not going to stop here. Sergey Tokarev explains that in the nearest future the company is planning to master a new technology of face replacement on videos, as well as to develop software that would be able to distinguish original videos from fake ones that were created with face replacement technologies.