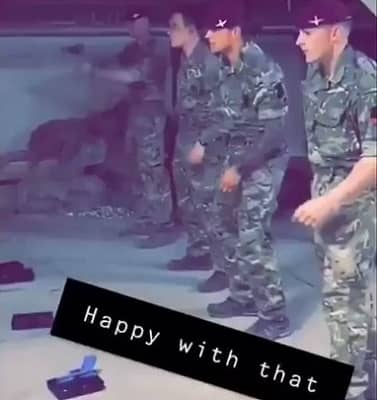 The Ministry of Defence has launched an urgent investigation after soldiers from the British Parachute Regiment were filmed in Kabul, Afghanistan using a photo of Labour leader Jeremy Corbyn for target practice.

A video has gone viral online showing the Para’s firing rounds into the picture of Corbyn’s head, the camera shows clearly the picture of the Labour leader.

Video has emerged of soldiers on a shooting range in Kabul firing at a target of Jeremy Corbyn. MOD confirms it as legit: pic.twitter.com/qOr84Aiivj

According to Sky News the soldiers were using “simulated paint round” and not real bullets, non the less the behaviour of professional soldiers is shocking.

It is believed the Parachute Regiment soldiers are based at New Kabul Compound in Afghanistan.

A spokesman for the British Army said, “We are aware of a video circulating on social media.

“This behaviour is totally unacceptable and falls well below the high standards the Army expects.

“A full investigation has been launched.”

Defence minister Tobias Ellwood said this is “unacceptable” he tweeted, “If authentic, this is unacceptable. Am looking into it.”

She added, “I hope the investigation will be conducted thoroughly and the conclusions made public.

“Political tensions are heightened at the moment and this type of behaviour is wholly inappropriate and unacceptable, we expect much better from our Army and soldiers.”

The shadow defence secretary Nia Griffith slammed the video on Twitter, she described it as “shocking and completely unacceptable.”

“Right that the Army is carrying out a full investigation.”