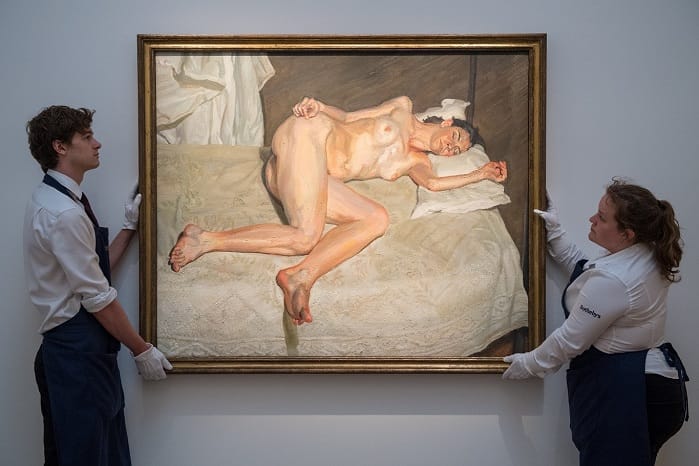 Most valuable painting by Lucian Freud ever offered in London auction

One of Lucian Freud’s last great nudes, ‘Portrait on a White Cover’, will make its auction debut at Sotheby’s London on 26 June. A late masterpiece, the work represents the culmination of Freud’s lifelong engagement with the reclining nude.

Alongside the self-portrait, the reclining nude was the defining leitmotif of Freud’s career. Across sixty years of painting, innumerable mutations of painterly style, and a multitude of sitters, he returned to this challenging subject time and again. ‘Portrait on a White Cover’ – one of the last reclining nudes that Freud completed – sits at the pinnacle of this endeavour.

The artist painted only three further reclining nudes before his death in 2011. The painting which immediately preceded Portrait on a White Cover, Naked Portrait 2002 – depicting Kate Moss pregnant – set a new auction record for the artist at £7.3 million when it appeared at auction in 2005.

Alex Branczik, Head of Contemporary Art for Sotheby’s Europe, said: “By the turn of the millennium, Freud was widely acknowledged to be Britain’s greatest living painter. However, even in the face of such plaudits, he refused to succumb to a late style, to allow his works to soften or loosen. The present work is testament to this refusal. Across fifty years of painting the reclining nude, Freud was leading up to this point.”

Freud was 80 years old when he commenced Portrait on a White Cover, and he had already achieved almost all that one could as an artist. In the 2000s alone, Freud was the subject of exhibitions at the Tate, the Venice Biennale, the Centre Pompidou, the Museum of Contemporary Art Los Angeles, and the Victoria & Albert Museum in London. His new paintings, including ‘Portrait on a White Cover’, were hung in the Wallace Collection in 2004. His coterie of sitters and subjects was similarly illustrious, and included the Queen who he painted between 2000 and 2001.

‘Portrait on a White Cover’ depicts Sophie Lawrence, who worked for Tate publishing and was spotted by Freud whilst preparing for his Tate retrospective in 2002. This is her only known portrait and there is little written about her in the literature surrounding the artist’s work. However, her slight remove from the oft-told narrative of the artist’s later years allows for a more unencumbered reading of this painting. That Lawrence was not one of the artists lovers, children, or celebrity friends means that in viewing this work, we are afforded no prejudice or bias, and in its appreciation we are better reminded of one this artist’s greatest contributions to the genre of portraiture.