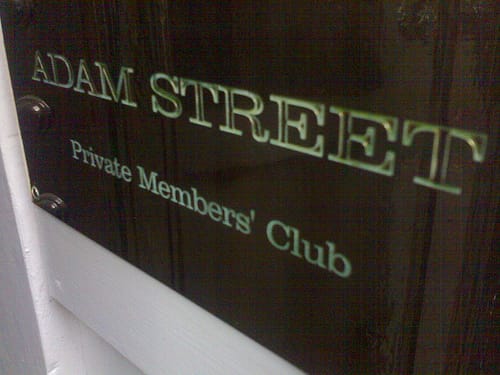 Adam Street is a familiar pin on the London map for many a local entrepreneur – the private members’ club is specifically for entrepreneurs and freelancers, giving them a place to work, meet and play. We reckon it’s one of the best private clubs in London doing what it’s doing.

Sadly, it is now dealing with the possibility of closure, as it faces eviction from its premises just off the Strand. HBOS is calling in the cross-guarantees behind the club. The club and serviced offices based in buildings off the Strand were owned by Geoffrey Minter, father of the club’s founder James Minter. Unfortunately funds Geoffrey was expecting to receive failed to materialise earlier this year, and as a result all the businesses are up for sale.

“Unfortunately the rather short-sighted agents are marketing the property as a residential development,” says James, who has a large property fund ready to buy the building.  “I think that it is tragic that a business like ours, which employs 40 people, pays over £700,000 in tax a year and is a hub for entrepreneurs can be in danger of being turned into luxury flats for the Singaporean market.

“We look after 30 small companies upstairs in the serviced offices and have 1,000 members – almost all of whom have their own businesses.

“I wish there was a more moral angle to the way HBOS views these situations but I suppose they feel duty bound to follow the advice of their agents.”

London entrepreneurs have rallied round the club. Stuart Anderson, a member of the club, says: “Adam Street is a hotbed of entrepreneurial talent – we work hard to encourage entrepreneurs and it would be a shame to lose it.”

Rob Symington, of Escape the City, says: “Turning an enterprise hub like Adam Street into posh flats doesn’t seem like the best use of taxpayer’s money – nor the way out for the economy.”

And Michael Acton Smith, founder of Moshi Monsters, has even offered to throw himself in front of the bulldozers.

“I have been overwhelmed by the support we have had, not only from members but from anyone who knows what we stand for down here,” says James. “We have been supporting entrepreneurs for years before it became a trendy thing to do. Mark Field our MP has been extremely useful too.”

There may be some luck ahead: it seems interest in the property might not be as fierce as was first presumed. It is a complicated building and despite being on the market for almost a month, it has yet to attract a bid.

But it only takes one buyer to make it game over for the club.

The interview: The mysterious founders of Gumtree.com