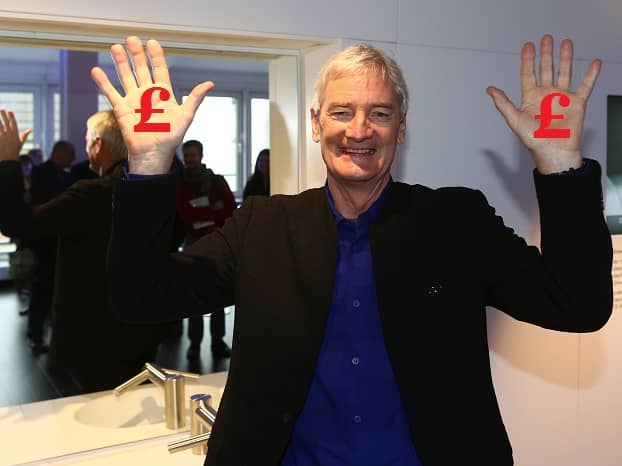 How rich is Sir James Dyson?

The vaccum king has no vacuum of money in his life

One of Britain’s most celebrated inventors Sir James Dyson just received a whopping £80m of dividend payouts from Holkham Group – the parent company of the Dyson empire.

The latest accounts filed by Holkham show that the company paid £25m in dividends to Sir James in the year ending December 31, 2014 and also made an interim payout of £55m in March this year.

Take a look at how loaded Sir James Dyson is:

Sir James Dyson is worth a cool £3.5bn, according to the Sunday Times Rich List. His wealth has shot up by £500m in the last year.

Dyson owns 100% of his company that paid dividends of £200m last year.

Sir James owns over 25,000 acres of land in England

The Dyson overtook the Queen as one of the largest private landowners in Britain last year. Yes, you read that right.

Other property assets that Dyson owns include:

Nocton and Carrington estates in Lincolnshire.

A townhouse in Chelsea

A home in Norfolk

The Nahlin was once owned by King Edward VIII but then spent much of its life derelict floating on the river Danube. In 2013, Sir James Dyson forked out over £25m to refurbish the yacht.

He funded a campus at the Dyson UK headquarters in Malmesbury which is expected to create up to 3,000 jobs.

He also donated £50m for an external research programme with British universities. He donated a further £200m to support manufacturing in south-east Asia.

Can Microsoft bruise Apple with launch of its first Windows laptop?