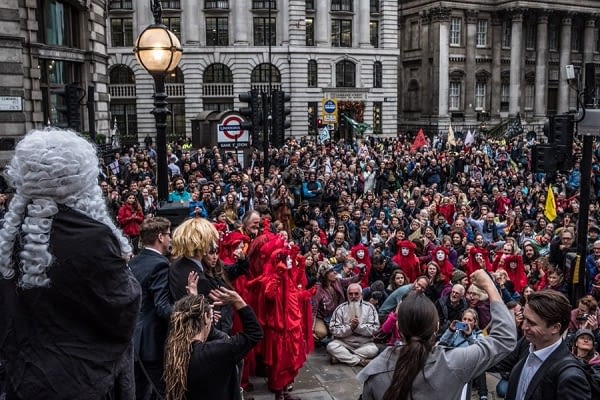 Extinction Rebellion applies for judicial review to the High Court

Extinction Rebellion (XR) lawyers are to submit an application for judicial review to the High Court for an urgent hearing on Wednesday.

A group of claimants Baroness Jenny Jones, Caroline Lucas MP, Clive Lewis MP, David Drew MP, Ellie Chowns MEP, George Monbiot, and Adam Allnut will bring an action on behalf of the group to challenge the Metropolitan Police’s blanket ban on XR being allowed to protest across the whole of London for the rest of the week.

Bindman’s Solicitors and Doughty Street Chambers are to advise over the challenge of the Metropolitan Police use of Section 14 of the Public Order Act to restrict the protests, saying the “ban is a disproportionate and unprecedented curtailment of the right to free speech and free assembly.”

Under the “draconian” use of the Section 14 order, any assembly, a group of more than two people linked to XR’s Autumn uprising will be deemed by the police as unlawful.

Anti-Brexit barrister, Jo Maugham QC said the move by the Met Police was “a huge overreach” of police powers.

Wagner said on Twitter, “We have a right to free speech under article 10 and to free assembly under article 11 of the (annex to the) Human Rights Act.

“These can only be interfered with if the interference is lawful and proportionate. I think the police may have gone too far here.”

The Labour Party is questioning the legality of the ban  and has said it is “an attack on civil liberties.”

Despite the police banning protests, many are set to continue defying the ban on Wednesday as a group of breastfeeding mothers and babies will be heading to the offices of Google and YouTube, and an emergency rally at Trafalgar Square is due to start at 1:30 today.

Julian Thompson from the climate change group said, “We have been on the streets to demand that the government produces a plan to deal with the climate and ecological emergency.

“The government’s silence is deafening, with no mention of it in the Queen’s Speech, which is their programme for government for the year.

“At a time when it’s more important than ever to peacefully assemble and protest on these emergencies, we are now at risk of being silenced by the authorities.

“This is a dangerous precedent. We need more democracy, not less.”

However, a government spokesman said, “The UK is already taking world-leading action to combat climate change as the first major economy to legislate to end our contribution to global warming entirely by 2050.

“While we share people’s concerns about global warming, and respect the right to peaceful protest, it should not disrupt people’s day-to-day lives.”