Home Business News Expert warns of war between US and China 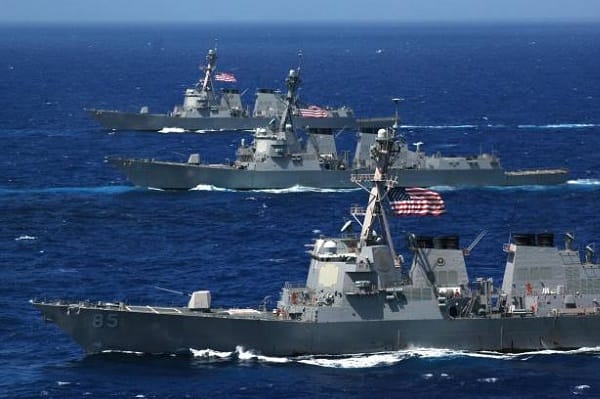 Expert warns of war between US and China

Growing tensions between China and the US could lead to full scale military action being taken as the confrontation between the two superpowers intensifies.

An expert has claimed that War could break out as President Donald Trump and President Xi Jingping are reaching the “point of no return.”

Trump entered the White House in 2016 and within months a trade war started and then both countries have issued a series of economic sanctions on each other.

Experts are worried that the growing divide could end up with military confrontation.

France 24 international expert Sanam Shantyaei warned, “There are concerns the two powers are reaching what we refer to as a point of no return.

“That there is a complete deterioration of relations between the two and that might even lead to, and that’s the worst-case scenario, military confrontation. Conflict.”

Shantyaei added, “This is an era that’s very much being shaped by voices from the most hawkish of personalities in both administrations.

“We have seen that play out on a much smaller scale, when we saw the crackdown on Chinese journalists in the US in a tit for tat move. Of course, we saw the expulsion of American journalists from China, so we know how this plays out.

“Observers are saying that the United States has the power at this point in time to moderate, to reform the behaviour of China both at home and abroad.

“To try to bring China so that it’s actually cooperating on massive regional issues.”

President Trump and the US Secretary of State Mike Pompeo have both been vocal critics of China since the global pandemic broke.

Whilst in Downing Street last week speaking with journalists, Pompeo slammed the Chinese President Xi Jingping and called him “disgraceful” for “exploiting” the coronavirus pandemic for their own interests.

He further warned last week that the US will end their policy of neutrality over Beijing’s claims over the disputed South China Sea (SCS), which could also lead to full scale military conflict.

Pompeo said, “The world will not allow Beijing to treat the South China Sea as its maritime empire.

“America stands with our Southeast Asian allies and partners in protecting their sovereign rights to offshore resources, consistent with their rights and obligations under international law.”

The US have been building a heavy naval and military presence in the SCS and Australia has now joined in with military drills in the area.

In May  aclassified Chinese intelligence report warns that China and the US could face a Tiananmen Square global backlash over Covid-19, which could lead to an “armed confrontation.”

The classified report warns that Beijing could erupt due to the rising hostility they are facing from global leaders over the pandemic, sources have said.

The classified report was presented by the Ministry of State Security to top leaders in Beijing, including President Xi Jingping.