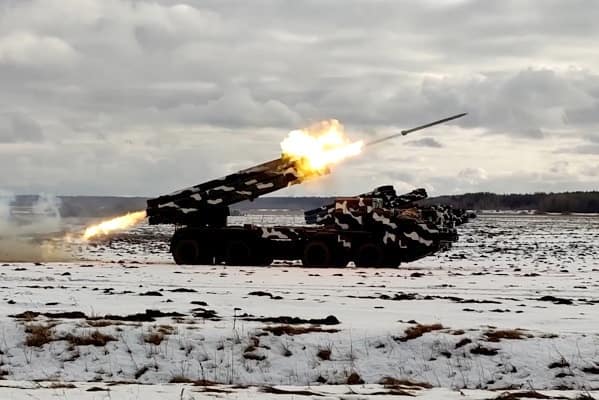 Russian occupation forces has opened fire on the village of Luhansk on Thursday and artillery shelling has been heard near Donetsk airport.

Also the village of Elenovka in Donetsk province has been shelled, both are areas controlled by Russian-backed rebels.

Both the Russian-backed rebels and Ukrainian government forces have accused each other of violating ceasefire agreements on Thursday.

However Ukraine’s military said, “With particular cynicism, the Russian occupation troops shelled the village of Stanytsa Lugansk in the Luhansk region.

“As a result of the use of heavy artillery weapons by terrorists, shells hit the kindergarten building.

Pavlo Kovalchuk, senior spokesperson in the Armed Forces of Ukraine told Sky News, “We have seen an increase in the amount of shelling and the caliber of the size of the shells being used but the situation is under control.”

He denied that Ukraine military have started shelling the disputed territories held by Russia-backed separatists.

“We are following the Minsk Agreement,” he added.

Truss said, “Very concerned about reports today of increased Russian aggression: over 7,000 extra troops near the Ukraine border and an attack by pro-Russian troops on a kindergarten in Ukraine.

“Britain calls on Russia to withdraw its troops – there is still time for diplomacy and de-escalation.”

Truss slammed Russia over reports of military activity in the Donbas by Ukraine was a “blatant attempt” by the Russian government to fabricate pretexts for an invasion.

“This is straight out of the Kremlin playbook,” she added.

According to Kremlin spokesperson Dmitry Peskov, Russia is “deeply concerned” over the flare up of violence in eastern Ukraine.

Peskov said he hopes the West will speak with Kyiv to prevent further escalation of more attacks.

A senior Ukrainian government source told Reuters, that shelling from Russian-backed separatists at the front line in eastern Ukraine “looks a lot like a provocation.”