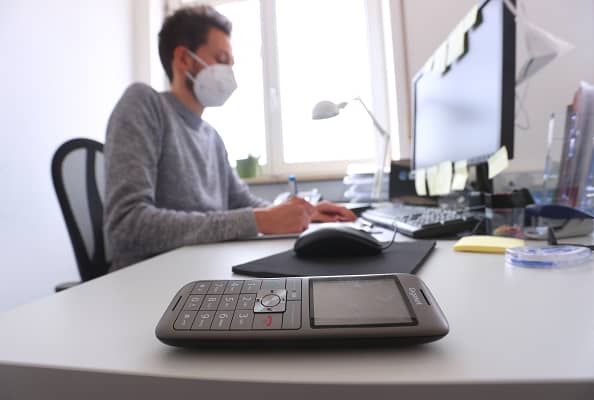 The move will see the traditional landline system transfer to a fully digital phone network in order to meet the demands of modern internet and mobile technology, with telephone wires and buried copper cables becoming a thing of the past.

Colin Hewitt, BT Product Specialist with Carlisle-based Integrity IT Solutions, is advising any businesses which still rely on the analogue network to make the switch to digital now so they can take advantage of better connectivity and communications.

He said: “The transition to a digital phone service has been underway for some time, with many businesses and organisations having already made the move.

“This is an opportunity to not only ensure that you are ready for the future but also to make the most of the improved connectivity which comes with it.

“From making calls on any device from anywhere on the same number, to linking business applications with video calls and chat, the technology is there to help your business operate more efficiently and effectively.”

In 2015, Openreach announced that the existing copper Public Switched Telephone Network (PSTN) and ISDN (Integrated Services Digital Network) network would be switched off by the end of December 2025, with calls instead routed over Internet Protocol (IP), a faster, more reliable and more cost effective voice system.

Colin said: “These traditional technologies have been the backbone of the UK’s landline network for decades but we’re now demanding much more from them than they were designed to deliver. It’s a similar situation to when the UK switched from analogue to digital television in 2012.

“Although 2025 may seem like a long time away, from September 2023 Openreach will not install any new PSTN or ISDN lines so it’s worth looking into the alternatives sooner rather than later so your business isn’t caught out.”

Colin said upgrading to a digital system offered opportunities to change the way you communicate.

He said: “It’s not just about doing what you do now but digitally; it brings new ways of working. For example, rather than simply choosing like-for-like hardware replacements, consider how your current set up could be improved, taking into account how your team currently uses technology.

“Most businesses use phone lines for more than just calls so you’ll need to identify items such as alarms, door entry systems, payment terminals or cash machines and plan how these devices will operate in the future.

“By making the move to digital now, you will see immediate benefits to your business including reduced ongoing costs, seamless maintenance and upgrades to software and services, and better security thanks to the reliability and flexibility of cloud-based applications.”

The 2025 switch off covers the whole of the UK, including any rural areas where broadband is not currently available. As part of the process, these areas will be upgraded or services accessed via alternatives such as 5G solutions.