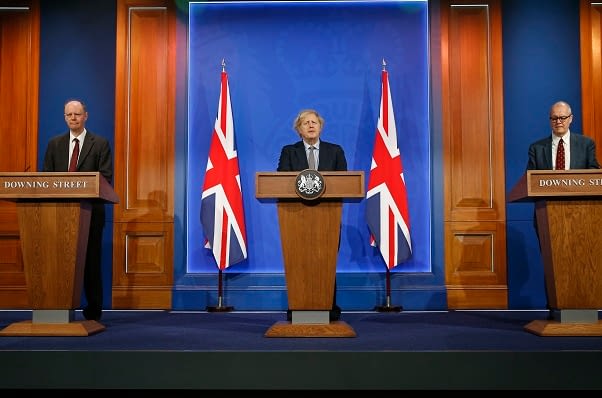 Boris Johnson has warned Brits to follow the rules to prevent a third wave striking the UK forcing further lockdowns.

The Prime Minister said at a press briefing, “What we don’t know is exactly how strong our fortifications now are, how robust our defences are against another wave and we’ve seen what’s been happening, that’s why I stress what’s happening with our European friends because historically at least there’s been a time lag and then we’ve had a wave ourselves.

“I just stress the importance in everybody maintaining the discipline that people have shown for so long and continuing with the cautious but, we hope, irreversible roadmap that we’ve set out.”

Professor Chris Whitty, the chief medical officer for England said that there is a “wall of vaccination,” but warned the wall is not complete, and “it’s kind of a leaky wall.”

Johnson said, “Already because of the relaxation that we’ve seen, almost certainly because of the opening of schools again, you’re starting to see some of those graphs slightly curl a bit like old British Rail sandwiches, moving upwards a little bit in the younger groups.

“You’ve seen what’s happening on the continent and we’ve seen that happen before, that’s why it’s so vital that, you know, we do what we’re doing right now.

“We continue to fortify the population, roll out the vaccine at the speed that we are, make sure, as Chris and Patrick say, everybody gets their second dose when they’re asked to come forward, when they’re given their turn.

“But, you know, just make sure that we are cautious in our approach, I think that’s the way to get the results that we want.”