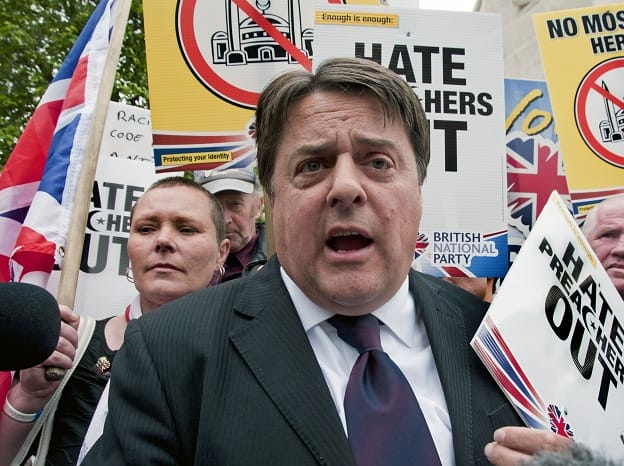 Griffin reportedly racked up huge debts after a dispute with a legal firm over professional negligence.

However, he would not stand down as MEP, BNP press officer Simon Darby told BuzzFeed.

“It doesn’t affect Nick’s status [as an MEP]. There’s a lot of nonsense going around that if you’re made bankrupt you lose your seat. The rules were changed, you’re not disqualified, and you can stand again,” he said.

Speaking about reasons that led to Griffin’s bankruptcy, Darby said: “This was a debt via a firm of solicitors that he has a considerable professional negligence claim against. They were offered a substantial amount every month as a settlement but rejected it. That’s why we are where we are.

“Nick’s taken this on the chin for the party, he’s going to be standing again, he’s been brave.

“A lot of people are struggling financially – it’s not as if everyone’s out there with a lot of money – and a lot of people have been screwed by the banks and political system, Nick’s no different. But a lot of politicians screw the system and in this case the system’s screwed Nick.

“He doesn’t a house, he doesn’t own anything, Nick. So that’s where it stops.

“It was a really foolish thing to do by these solicitors because they believe they’re going to get the money back.”

Darby went on to say that despite the bankruptcy, Griffin would stand for election again.

“You’ve got to have a bankruptcy restriction order against you to be disqualified. This is just a normal twelve month term of bankruptcy. This is no longer enough to disqualify you from standing again.

“Ironically, I think it’s European law that’s brought us in line. There’s various things in European legislation that have been forced upon us and every cloud has a silver lining. I think it’s due to pressure at European level for the UK to get in line.”

5 surprising celebrity Eurosceptics, from Posh to a certain Prince