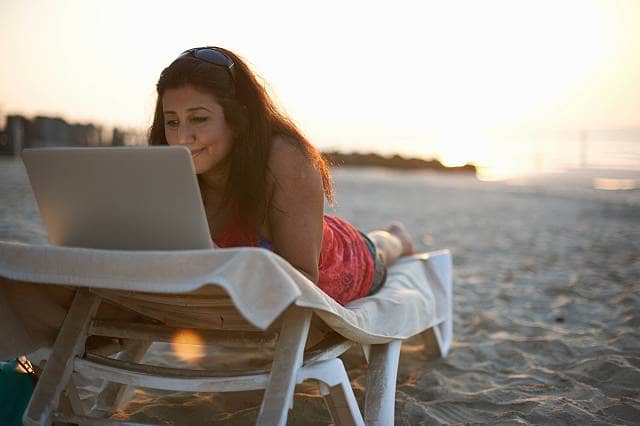 An estimated 60% of adults were initially forced to work from home during the pandemic, which has resulted in 4.3 million employees now having flexible working contracts, as many of us simply didn’t realise that we would be able to do our jobs from home. Workers have more flexibility with where they work, much more than simply deciding whether they want to work in the office or from their kitchen table, as there’s been an upsurge of people taking their work abroad and taking on the “half tourist” way of life.

As 39% of UK workers recently revealed they had worked while on a holiday abroad in 2022, and searches for “working holiday” have seen an enormous 253.8% uplift in the last month alone, Wizz Air reveals the best destinations for working holidays.

By analysing the average cost of renting a one-bedroom space in popular cities for a month, broadband speeds and the average spending cost of the location, Wizz also reveals how spending up to a month working abroad can work out cheaper than working from home in the UK.

Famed for its pristine white sand beaches, Mediterranean and Middle Eastern influenced cuisine and historical sites, Cyprus is truly a mecca which offers something for every type of worker. Spend your working day basking in the sunshine while replying to those important emails (somehow emails are much more manageable when your immediate view is turquoise waters caressing a stunning beach!) and unwind in the evening with a meze, paired with sweet Cypriot wine.

For culture vultures, spend time exploring the ancient ruins on the island, from the birthplace of Aphrodite to the amphitheatre and Roman baths. Those who need more of a release from a busy day at work can spend an adrenaline-filled evening parasailing, waterskiing and sea kayaking, with many operators offering incredible night sea kayaking opportunities.

One of the safest countries, and ranked the most peaceful country, in the world, Iceland is perfect for solo workers who want an escape from their everyday lives. With dramatic backdrops, adorned with glaciers, mountains and volcanoes, and opportunities to see the Northern Lights, Iceland can feel worlds away from daily city life and is particularly ideal for those who need a breath of fresh air.

What better way to unwind after a particularly stressful day online than soaking in one of the numerous hot springs around the Icelandic countryside? Many tourists flock to the Blue Lagoon, a geothermal spa, however, locals are super friendly and will advise on the best alternatives to avoid crowds.

The largest of the seven Canary Islands, Tenerife is almost three islands in one, boasting sandy beaches, seaside towns and rolling green hills adorned with national parks. As Tenerife has a subtropical climate, which rarely drops below 20°C, the island is especially ideal for those who want to escape the dark mornings and evenings that Autumn brings and seek a well-deserved dose of vitamin D.

Tenerife also boasts an array of pubs, beach bars and cafes where you can sit and work for the day while indulging in local Canarian cuisine. For inspiration and a creativity boost, you could go for a meander in the botanical gardens, or the Tenerife Espacio de las Artes which boasts three galleries of Spanish art.

One of the most visited cities in the world, and for good reason, Rome is best known for its rich history and culture, with many historic sites readily available to visit. Spend your time exploring the Colosseum, Palatine Hill and the Roman Forum before reaching the majestic Trevi Fountain and taking in the stunning views.

Rome, like many European cities, has a café culture at its heart, with cafés staying open much later than we’re used to in the UK. If your work allows it, you could spend the day exploring UNESCO World Heritage sites like The Vatican, then unwind in the evening in a quiet yet hip and cosy café that serves food, snacks and, most importantly, coffee.

Dubbed the “Paris of the East,” Budapest is a beautiful and charming city that attracts more and more visitors each year. As a start-up hub, where ICT companies in particular account for more than 10% of jobs and employ more than 100,000 workers, Budapest is adorned with co-working spaces where you can feel productive while speaking and mingling with workers from all around the world. Where better place to make connections than one of the biggest hubs in the world?

Once the networking ends, wander at your own pace up the Castle Hill, a UNESCO World Heritage Site which is home to numerous attractions, from the 700 year old Matthias Church to a panoramic view of the city. End your sightseeing with classic Hungarian dishes such as Goulash and lángos.