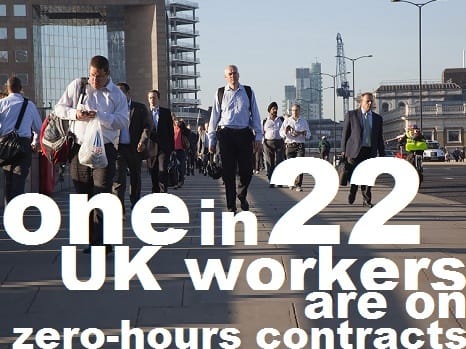 The number of people on zero-hours contracts is almost three times higher than the government had previously estimated.

The Office for National Statistics announced today that it believes around 1.4 million people in this country are on the highly controversial zero-hours contracts. It had previously put the figure at 583,000 people.

Today’s figures have been drawn from a two-week survey the ONS conducted in January and February.

I think it’s worth putting the new figures into context, so we can get a feel for quite how widespread the use of these contracts has become.

In total there are 30.39 million people in work aged 16 or over, according to the ONS’s labour market release from last month.

That means just under one in 22 people in the UK are on a contract that does not guarantee a minimum number of hours – or around 4.6% of the working population.

Zero-hours contracts are not just used by small businesses trying to create more flexibility and cut costs – quite the opposite, in fact.

Only 12% of businesses with fewer than 20 employees use no-guaranteed-hours contracts.

Meanwhile, around 47% of companies with 250 or more staff use zero-hours contracts.

4.       Zero-hours contracts are most common in the least glamorous industries

You might not be surprised to hear that zero-hours contracts are rare in financial and professional services.

But it’s quite a different story in less glamorous industries.

More than one in five health and social work businesses use zero-hours contracts, according to the ONS data.

And around 45% of accommodation and food businesses use zero-hours contracts.

5.       Yet most people on zero-hours contracts aren’t looking for more work

But here’s one of the most interesting things to have come out of today’s ONS release.

It seems that an overwhelming majority of the people on zero-hours contracts are not looking for more hours.

More than six in 10 people on zero-hours contracts don’t want any more hours, while only two in 10 do want more hours.

That doesn’t, of course, mean that workers are happy being on zero-hours contracts – merely that they don’t want more hours as part of those contracts.