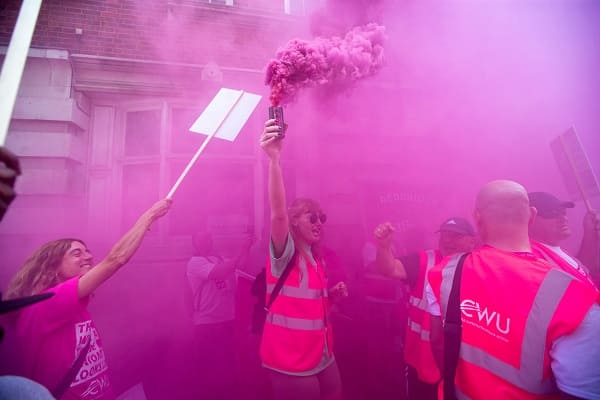 The new  general secretary of the Trades Union Congress (TUC) has warned the country is heading for a de-facto general strike and if the government doe not discuss pay then there will be coordinated industrial action.

In 2023 there could be a “rolling wave” of strikes as unions will coordinate industrial action all to happen on the same days which will bring the UK to a standstill.

The new general secretary of the TUC Paul Nowak warned of more disruption to the UK if the government does not join the discussions over pay and unions have a “responsibility” to support their members striking, which “means in some circumstances coordinated industrial action.”

Novak told Sky News, the strikes “could end tomorrow if the government was prepared for serious and sensible discussions about pay.

“Our unions will be continuing to talk in the new year about how we best support and coordinate unions taking that strike action.

“In some cases, that might mean unions taking strike action on the same day and in other cases it will be a rolling wave of industrial action.”

Novak said that there is “no evidence” that public sector pay is “driving inflation” in the UK and Ministers must be more concerned with what is “happening to profits.”

The TUC chief said, “So profits up 31% last year alone, dividends handed out to shareholders are rising three times faster than wages, a bumper year for bonuses in the city of London and a government that decided to lift the cap on bankers bonuses.