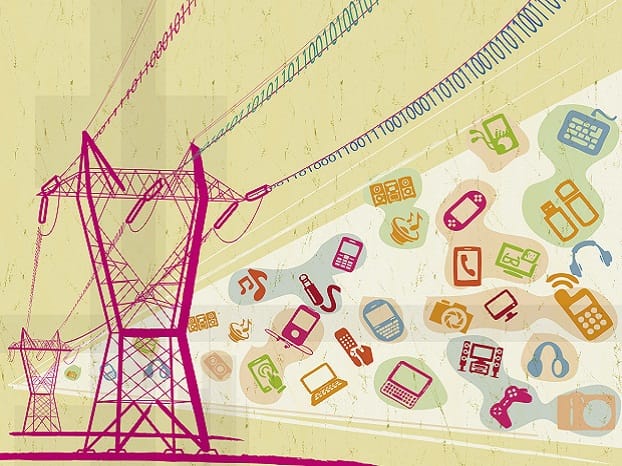 You probably won’t have heard of Nigel Eastwood.

New Call Telecom was formed after Eastwood led the management buy-in of the business from its US parent company PTGi in 2010.

The business grew quickly by opening a sister company in India called New Call India. Then it acquired an Indian instant messaging app Nimbuzz for a reported $175m in November this year.

The company now boasts a total of 600,000 customers worldwide and is expecting to serve 750,000 people by the end of next year.

How has New Call Telecom done it? We asked Eastwood:

Q. Tell us a bit about yourself, how did you end up setting up New Call Telecom?

I’m from East Lancashire and I still live there with my wife and family but I spend most of the week in London at our headquarters near Covent Garden.

I started my career in the software industry, but saw the massive opportunities created by deregulation in the telecoms industry. I was involved in two high growth telecoms companies Daisy Commercial and Fizz Telecom, before being headhunted as sales director into Primus Telecommunications Group Inc, the third largest international voice carrier in the world. Unbeknown to me I had timed my arrival well as two years after I joined, the business wanted to sell its UK operations. I saw a superb opportunity, but for legal reasons it couldn’t be a management buy-out – they needed to sell it to someone outside the company. I did a few calculations and took a very big risk: I left my job in order to be eligible to buy the UK part of the company! The European MD thought I was mad!

Q. Where did you get funding from?

At first I did worry slightly that perhaps I’d bitten off more than I could chew but fortunately I’ve always taken networking extremely seriously so I knew a large number of potential investors and high-net-worth individuals. I got in touch with one of them, Bob Morton, a serial entrepreneur interested in high-growth business opportunities and flew to Jersey to meet him. England were playing Germany in the football and we did the deal while watching the match!

It still took 12 months to complete the transaction though, and during this time I was totally self-funded. I had to cover the lot – from my travel expenses to legal costs. There were days when I was very worried about whether it would ever happen, there were many tense gut-wrenching moments, but I was totally determined to buy the company. We completed the deal in October 2010, and in 2012 we gained a fantastic new investor, Dr Jerome Booth, an entrepreneur and expert in emerging markets. Together we now are pushing forward with our strategy of investing in rapid-growth telecoms in India, the Middle East and North Africa.

Q. How easy was it to set up a business in London? Did having a London HQ help get clients?

There were 15 staff in London when I bought the company and I never considered moving them elsewhere. Having a London office is vital in my view. All our key vendors, stakeholders, OFCOM, the major price comparison sites, BT and TalkTalk are all in London. I did repatriate our contact centre function to Nelson in Lancashire from India because I thought that made sense from a customer service point of view and I also wanted to create jobs in my home region of East Lancashire.

London is a key platform for any business operating globally, and not just for UK-centric operations. London gives you credibility – everyone knows it’s one of the top, if not the top business hub in the world. Some of the world’s most talented individuals from across the world gravitate to London. It’s a key hub, a massive financial centre where highly educated, hugely experienced people know they can progress their careers and aspire to great things.

In our office we have employed people from across the world, from South Africa, Australia, New Zealand, China, Japan, Pakistan & India. There’s a great mix of culture in the office and I strongly believe you need this in a global business operation – it generates an eclectic mix of thinking across the business that you need to be successful.

Q. How did manage to get customers in?

I’ve always been focused on ROI. We haven’t got the enormously deep pockets for marketing that some of our peers have – we can’t sponsor big TV shows or football teams –  so we focused on building excellent relationships with price comparison sites. Price comparison sites love a challenger – they love David vs Goliath. It creates excitement for them and demonstrates to their users that they’ve got full market reach – they’re not just churning out deals from the same old big corporates. That’s where most of our early customers found out about us and, of course, we deliver an exceptional service so word gets around!

Q. Why did you decide to buy Nimbuzz?

To me, Nimbuzz is a totally revolutionary acquisition. It gave us a foothold in the fastest growing telecoms market in the world: India. But also gives us penetration into other exploding markets, particularly the Middle East and North Africa. Nimbuzz has 210 million users and it has massive expansion potential into new revenue streams. Another reason we bought the business was that amongst its employees it has some of the world’s most creative thinkers. Truly remarkable people. In my view Nimbuzz, has some of the best app developers in the world. Equal if not better than Silicon Valley – I think that the brain drain that went to America is now happening in reverse, the brains are returning to India, and the developing world in general.

So now we’ve got Silicon Valley in New Delhi and I believe we can out-punch and out-perform some of the global players in a hugely competitive market. The next step is to turn Nimbuzz into a Centre of Excellence for app development. I see it as an incubator for delivering exceptional customer-centric apps, especially targeted at emerging markets.

Q. What other companies has New Call invested in? What are your future plans?

We have ambitious, funded plans and on top of the Nimbuzz acquisition we’re in talks to acquire a number of other telecoms businesses – at least three or four more in the coming year.

I’m looking to create a group of businesses that aggregate three different areas of telecoms: social messaging, wifi and fixed-line home connectivity. I call this ‘My Digital Life’. In the developed world we take internet access for granted. It’s just there. But more than half the global population is still not connected to the internet. In fact, in some countries, the internet is virtually non-existent. The market is massive.

There are at least 250 million middle-class people in India and most have a higher disposable income than in their counterparts in UK – these people wa
nt good home broadband connectivity, and less than 1% of Indian homes have true broadband connectivity today. And it doesn’t stop there: e-commerce in India is set to be a £20bn business in the next few years. Mobile advertising in the Middle East is huge, PwC estimates that the revenue for this will grow from $700m in 2013 to $3bn in 2016 – in India it is set to be a $5bn business very soon. So you can see, there’s plenty of growth potential!

Q. What’s your turnover, profit and total customer numbers like?

The business run rates for New Call will be $200m in 2015, we serve approaching 750,000 customers in the UK each year and hundreds of millions of customers each year across the consolidated group businesses, and by 2015 we’ll have approaching 500 staff.

Have you got two mins to tell us how we can improve LondonlovesBusiness.com for you? Take our super-quick survey. Thanks!

From zero to £190m: How Nick Wheeler built Charles Tyrwhitt

Victoria Beckham has just been ranked the UK’s top entrepreneur

Bank of Dave is coming to a high street near you. Would you bank there?