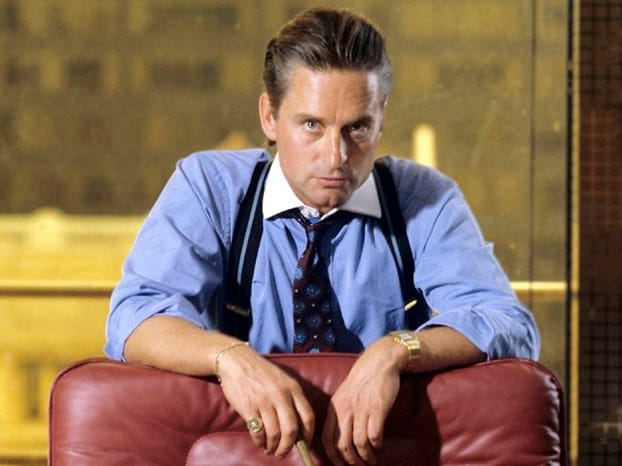 You’ve got just a few more days to write New Year’s Resolutions. But are you in the right frame of mind? This could be the year you take your business stratospheric. You could crack China. Send your closest rival to the wall. The year you win Entrepreneur of the Year.

This could be *the year*.

All you need is the right motivation.

So, just in case the turkey leftovers are clogging your mental arteries, here are six adrenaline-soaked pep talks cast-iron guaranteed to get you walking and talking like a Wall Street big-shot circa 1986. Watch them all and you’ll be buying red-braces in the New Year’s Sale.

“The good news is you are fired. The bad news is you’ve got one week to regain your jobs”

An insurance tycoon I know shows this speech to every new recruit. Every line is worth learning. Not that you could forget the message: “A-Always, B-Be, C-Closing. Always Be Closing”. Oh, and check out 5.20. You need a pair of those on your desk.

“Greed is good, in all its forms”

Hear me out on this: Gordon Gekko is not saying what everyone assumes he’s saying. Watch the clip. He’s demanding accountability to shareholders. He’s advocating the board of the company take a stake in the company. He’s insisting Teldar Paper makes money by cutting ranks of pointless bureaucracy. These are all sensible things. And he’s appealing to our sense of self-interest to make it happen. It was the genius of Adam Smith to point out that enlightened self-interest leads to the butcher and baker supplying top-notch goods for knock-down prices. Gekko is simply demanding that executives do their jobs well and serve the customer to make more money. Tell me I’m wrong.

Terrible Terry Tate was created for a Reebok superbowl ad. Triple-T was a massive hit. You can see why. What business doesn’t need an office linebacker bringing the pain to fools who don’t know what time it is?

From The Social Network, which dramatised the rise of Mark Zuckerberg and Facebook. Napster-founder Sean Parker (played by Justin Timberlake) reminds us what a business plan should really be aiming for.

“The money’s not here, your money’s in Joe’s house, that’s right next to yours”

Pity Jimmy Stewart as he tries to explain fractional reserve banking to a panic-striken mob. Yet he does it. In fact It’s a Wonderful Life achieves the near impossible of explaining why financial services are so essential to communities. Even gets you rooting for sub-prime mortgages. Now that is a Christmas miracle.

Swallow too much corporate BS and this is how you’ll end up. Fry and Laurie wrote this as they had no idea what it was like to work in an office. The American affections, the clutching for hyperbole…toe-curlingly true in many offices in and outside of Uttoxeter.

You need to read this…

Political spoof videos: The good, the bad and the ugly