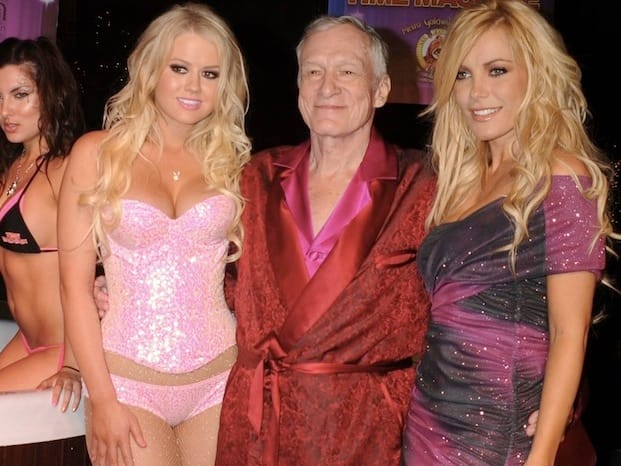 As the 86-year-old remarries, we dish out some of his secrets…

Why? Because the 86-year-old wed his off-and-on 26-year-old girlfriend Crystal Harris on New Year’s eve.

He might be 30 years older than his new bride’s mum but the gargantuan age gap is no big deal for the man.

“The dramatic age difference between Crystal & me really doesn’t matter. Whatever time I have left, we want to spend together,” he tweeted.

As you all might know, this wasn’t the first time down the aisle for Hefner, he’s been married twice and has four children.

And you might also know that Hefner has a rabbit named after him and a sign on his Chicago mansion’s front door reads in Latin, “Si Non Oscillas, Noli Tintinnare,” or “If You Don’t Swing, Don’t Ring.”

He might be known for having seven girlfriends at one time on his rotating bed, but there’s more to the man. Hefner’s considered an “almost a genius” with an IQ of 152.

Although known to be an “unenthusiastic student”, he also has a degree in psychology from the University of Illinois.

3. The Playboy magazine could be called Stag Party

If Hefner stuck to his first choice of name, the world’s top selling men’s magazine would be called “Stag Party”. He went with Playboy after he found that an outdoor living magazine called Staag too was on the stands.

And boy was that a good decision because the very first issue of Playboy with a nude Marilyn Monroe on the cover sold 54,000 copies.

5. Hefner still calls all the shots

The man’s in no mood to retire and hasn’t delegated the job of keeping up with the image of the magazine.

Last year, in an interview with Hollywood Reporter, Hefner said:

6. A year-long celebration for the 50th anniversary of Playboy

To celebrate Playboy’s 50th anniversary in 2010, Hefner threw not five, not ten but 50 parties in 50 cities around the globe.

If it weren’t for Hefner, then Los Angeles’ legendary 45-foot Hollywood sign wouldn’t stand tall. In 2010, when property developers were thinking of snapping up the site, Hefner donated $900,000 to preserve the sign.

“It would have been a real shame after having restored it if it wound up sold. It’s become something iconic and represents not only the town but represents Hollywood dreams, and I think that’s something worth preserving,” he said after shelling out the cash.

5 things you need to know about Mark Carney, the next Bank of England governor