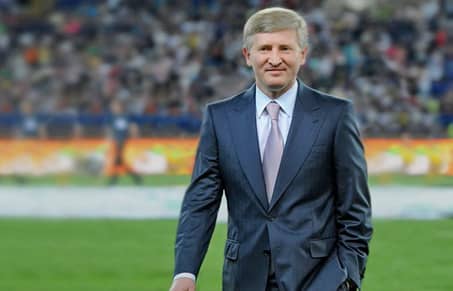 Rinat Akhmetov says he will spare no expense in helping Ukraine

As Ukrainian citizens took to the streets of Mariupol, which is home to half a million people, to protest Russia’s aggressive and unwarranted invasion, the country’s richest citizen, businessman Rinat Akhmetov, doubled down to reaffirm his loyalty to his nation and the government.

Akhmetov, who arrived in the port city of Mariupol on his private jet after facing fierce criticism for leaving the country just a few weeks earlier, spoke to his workers at a Metinvest facility that’s based in the city. During his speech at the facility, Akhmetov announced that he would continue to make significant investments in his business and country, “no matter what dreadful scenarios we face.”

“Today, the entire world worries about us,” he told his employees during his visit, thanking them for their unwavering loyalty amid “uneasy, dangerous, and anxious times” and promised new investments.

“In wartime, our company operates accordingly. Now our utmost goal is to help Ukrainians survive and withstand,” the billionaire recently said to Forbes Ukraine.

Rinat Akhmetov, the son of a coal miner, went on to talk about his home city of Donetsk, a place that he has not returned to since Russia’s invasion and annexation of the region in 2014.

Akhmetov himself had been hit hard by the 2014 invasion, with several of his assets—including real estate, gas stations, and the home stadium of his football team, Shakhtar Donetsk—falling to the Russians and becoming virtually worthless in a matter of days when the city was seized.

This time, Akhmetov says that he is preparing for the worst. “I have already instructed my foundation to help with evacuation, medicines and everything necessary, if needed. We will do everything to prevent a humanitarian disaster,” he said two days before Russia’s invasion.

Indeed, Akhmetov’s fears were not unfounded. Fierce fighting broke out in the port city of Mariupol as Russian troops reached the city centre. Distressing images have been seen around the world as Russian forces ruthlessly shelled grocery stores, hospitals, and homes with heavy artillery, resulting in a significant loss of civilian life.

Latest estimates say that more than 2,300 people have died since Russia’s invasion of the city. On Wednesday, March 9, a maternity hospital was completely destroyed by a Russian airstrike.

“I can’t wrap my head around the fact that Mariupol is in a complete blockade in 2022, that people are forced to hide in the workshops of our production plants,” Akhmetov said when speaking to Forbes Ukraine. “It is impossible to hear or talk about it without tears in your eyes that people melt snow and drink meltwater to stay alive. That a 6-year-old girl died of dehydration under rubble at the centre of Europe.”

The billionaire businessman, who is Ukraine’s richest person, saw his personal fortune drop from $US14 billion to less than $US6 billion in just two weeks due to the attack on Ukraine.

When asked what needs to be done to stop Putin, Akhmetov said, “We see the united action of the western world on an unprecedented scale. I am deeply grateful to our international partners for that. What else can and must they do? I believe everything that Ukraine, the Ukrainian people and the Ukrainian President are asking for.”

Recently, European leaders have pledged to provide more assistance to Ukraine. This includes UK Prime Minister Boris Johnson who, during a telephone call with President Zelensky on Friday, March 18, vowed to stand with Ukraine at a time when its people are “facing such horror with such courage”.

Mr. Johnson said he told Mr. Zelensky: “We know that we must do more to help. I pledge to you that we will.”

As for what Akhmetov finds acceptable, he says that nothing less than a total ceasefire and complete withdrawal of Russian troops from Ukraine will lead to victory, adding, “…and full restoration of the internationally recognised borders of Ukraine. That includes Crimea and Donbas.”

Despite the financial setbacks faced by Akhmetov and his companies, he has confirmed that his workers are still receiving salaries. “Today, all our businesses focus all their efforts on helping people.”

Just like it did in the wake of the war in Donbas, Rinat Akhmetov’s charity – the Rinat Akhmetov Foundation – has stepped in to provide relief to those affected by the conflict.

“My heart bleeds from what is happening now in Mariupol: from the fact that Mariupol residents are hiding from shelling in the shops of our factories; from the fact that our power engineers are doing everything possible and impossible to make it light and warm.

“My Foundation is helping Ukrainians survive by providing water, food, medicines, and any help we can give here and now. SCM businesses are helping the army and territorial defence forces to defend our sovereignty, our freedom and independence, and win the war.”

The Foundation, which was founded prior to Russia’s invasion of Ukraine, was established to affect real change in the country by solving social injustices. According to the Foundation’s website, its mission is to, “Work for people by eliminating pressing social problems by adopting the best experience gained in Ukraine and abroad; by creating unique system decisions; by achieving the best results with each of our projects and activities.”

It goes without saying that absolutely all the Foundation’s resources, and indeed the resources of Akhmetov’s other business assets Metinvest and SCM Group, will be wholly focused on the present situation in Mariupol and other parts of the country that have fallen victim to Russian aggression.

The Mayor of London, Sadiq Khan, has today announced that community-led organisations will be …

Reduction in overall rate of income tax would...