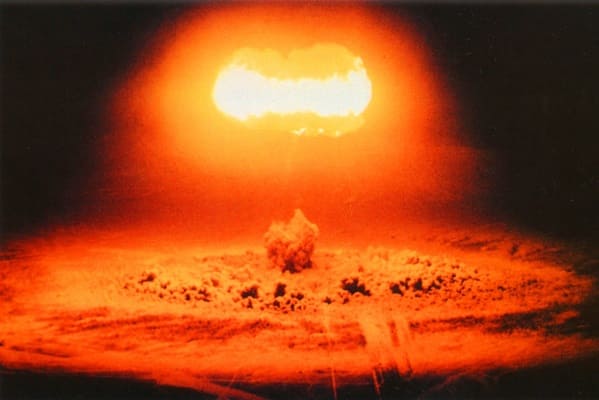 Vladimir Putin has placed a nuclear weapon “on combat duty” which is aimed at the US and the UK which is ready to launch.

The Yars nuclear missile was loaded into a silo at the Kozelsk missile base, which is near to Moscow and is ready for deployment.

The Yars intercontinental ballistic missile is said to be 12 times more deadly than the atomic bomb dropped on Hiroshima and has a capable range of 7,500 miles.

Missile force commander Colonel Alexei Sokolov was quite clear that this is sending a strong message to the West.

Sokolov said, “The importance of this operation lies in the fact that the missile will be put on combat duty on schedule.

“The homeland will get another nuclear missile weapon, which will make it possible to solve any tasks at the strategic level.”

Combat engineer Vadim Vyazovsky told TV Zvezda, the Russian defence ministry’s own channel: “I feel proud of Russia that my country is putting such products into service so that the Motherland can sleep well.”

Last week Putin warned that Moscow could start to think about a preemptive nuclear attack by adopting the “ideas developed by our US counterparts, their ideas of ensuring their security.”

This means that Moscow could now change their doctrine to allow the use of nuclear weapons in a conflict before the country has suffered a strike from elsewhere.

On Monday the Kremlin’s spokesman Dmitry Peskov said Moscow could move to similar parallels that Washington uses, which are designed by “disarming” nuclear attack.

Peskov said, “So if we’re talking about this disarming strike, then maybe think about adopting the best practices of our American partners and their ideas for ensuring their security.

“We’re just thinking about it.”

Asked about those comments made, Kremlin spokesman Dimitry Peskov said on Monday, “It’s not about some quick moves in that regard.

“It’s about the fact that there’s a non-stop thinking process, a collation of doctrinal tenets, a regular analysis of that by experts, including from the perspective of how the broader situation is unfolding.”

Putin also warned that he threat of a nuclear war is on “the rise” and added, “defend ourselves with all the means at our disposal.

“We haven’t gone mad, we realise what nuclear weapons are.”

He then said, Russia “does not have tactical nuclear weapons in other countries unlike the United States.”

He added, “We have the most advanced weapons, but we do not want to wave it around,” and no “Russia has not gone mad.”