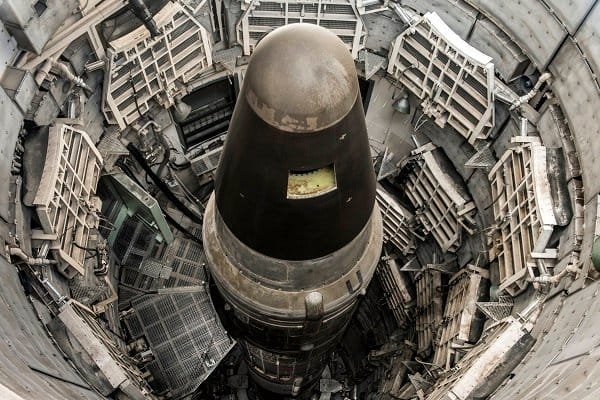 Last week Vladimir Putin warned that Moscow could start to think about a preemptive nuclear attack by adopting the “ideas developed by our US counterparts, their ideas of ensuring their security.”

This means that Moscow could now change their doctrine to allow the use of nuclear weapons in a conflict before the country has suffered a strike from elsewhere.

The Kremlin’s spokesman Dmitry Peskov said Moscow could move to similar parallels that Washington uses, which are designed by “disarming” nuclear attack.

Peskov said, “So if we’re talking about this disarming strike, then maybe think about adopting the best practices of our American partners and their ideas for ensuring their security.

“We’re just thinking about it.”

Asked about those comments made, Kremlin spokesman Dimitry Peskov said on Monday, “It’s not about some quick moves in that regard.

“It’s about the fact that there’s a non-stop thinking process, a collation of doctrinal tenets, a regular analysis of that by experts, including from the perspective of how the broader situation is unfolding.”

“It is a terrible war in Ukraine. It is also a war that can become a full-fledged war that spreads into a major war between NATO and Russia.

“We are working on that every day to avoid that.”Stoltenberg, who is the former Prime Minister of Norway warned, “there is no doubt that a full-fledged war is a possibility.”

He added, it’s important to avoid a conflict “that involves more countries in Europe and becomes a full-fledged war in Europe.”

Putin warned that Moscow’s precision-guided cruise missiles do outperform similar US weapons, he added, that Russia has hypersonic weapons that the US hasn’t deployed.

Putin then accused the West of using Ukraine as a tool against his country, he said, “For many years, the West shamelessly exploited and pumped out its resources, encouraged genocide and terror in the Donbas and effectively turned the country into a colony.

“Now it’s cynically using the Ukrainian people as cannon fodder, as a ram against Russia by continuing to supply Ukraine with weapons and ammunition, sending mercenaries and pushing it to a suicidal track.”