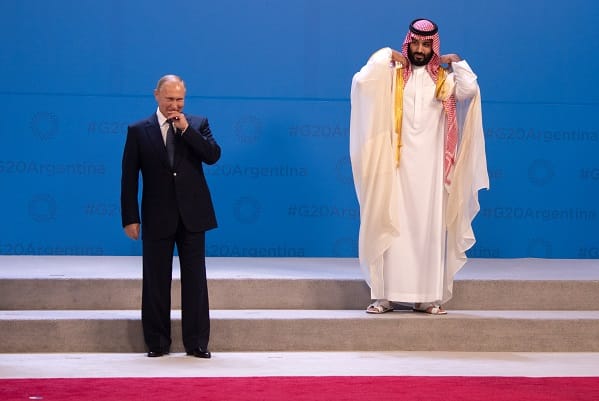 A former NATO planner has raised a “real concern” that Moscow will help Tehran to “develop nuclear weapons.”

Saudi Arabia has warned that if Iran has an operational nuclear weapon then “all bets are off” and the Gulf states will “ensure their own security.”

Former NATO planner Philip Ingram said, “It is clear that the real concern is that Russia will help Iran develop nuclear weapons.”

Ingram said that Russia has provided North Korea with support for their nuclear programme which therefore has set a precedence.

“Since then, North Korea’s missile programme went from being unsuccessful for short range missiles without a working nuclear warhead, to now being successful with Inter Continental Ballistic Missiles.

“I guarantee that the people working on it don’t speak Korean.”

Saudi Arabia’s Foreign Minister, Prince Faisal bin Farhan Al Saud warned, “If Iran gets an operational nuclear weapon, all bets are off” and the Gulf Arab states will guarantee their own security in the region.

He added, “We are in a very dangerous space in the region…you can expect that regional states will certainly look towards how they can ensure their own security.”

The Kremlin are also trying to secure more advanced weapons “including hundreds of ballistic missiles” from North Korea and Iran.

She told the United Nations Security Council in New York that Vladimir Putin is trying restore his vastly depleted stocks of cruise missiles and rockets over the winter ready for a new offensive next year.

Woodward said that Moscow are using Iranian made drones and missiles to deliberately “kill civilians and illegally target civilian infrastructure” in Ukraine.

“In return, Russia is offering Iran an unprecedented level of military and technical support.

“We’re concerned that Russia intends to provide Iran with more advanced military components, which will allow Iran to strengthen their weapons capability.”