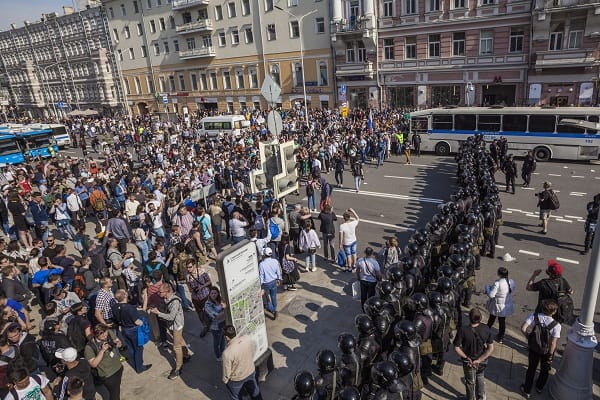 A wave of unprecedented protests has rocked Russia since last Wednesday when Vladimir Putin ordered the mobilisation of at least 300,000 men who are eligible for military service.

Since then thousands have been seen fleeing Russia and authorities have been dragging youngsters of the streets who are then sent to military camps.

The Kremlin has been rocked by the protests which have hit Moscow and St. Petersburgh which is home of Putin’s regime.

Kremlin figures are targetting the poor ethnic minority region in an attempt to avoid triggering any more problems in the richer cities.

Putin has disappeared from public life and is said to be at a “secret palace” which is located in the forest of Valdai and this move is likely to spark more rumours over his health.

The palace has been described as Putin’s “most secret official dacha” and Kremlin officials have denied that he is taking a “holiday.”

Journalist Farida Rustamova has said that it is most likely there will be a series of pre-recorded videos which will appear in the coming days.

Officials have said that Putin is “resting” at the palace and Rustamova said a trusted source said, “that since last Wednesday evening, Putin has been resting ‘body and soul’ in his residence in Valdai in the Novgorod region.”

Many experts have claimed that Putin has lost his grip and his position remains very uncertain since the widespread demonstrations started.

Unique shots from Dagestan, the chuchundra scavenger running away from the angry crowd. pic.twitter.com/pmE6Y0DyyR

Wall Street Journal reporter Matthew Luxmoore tweeted on Sunday, “Worrying scenes in Dagestan where parents of children mobilised for Russia’s war in Ukraine have blocked the main road to the regional capital.

“Police are firing in the air to restore order.”

Videos posted by Nexta TV women from Dagestan “voicing their demands to local officials” to stop the Kremlin’s orders of the mass mobilisation of their men.

In another clip a police officer who had detained a demonstrator could be seen being overwhelmed by protestors, whereby the police started firing shots into the air.

Protests against mobilization began in Dagestan. Protesters have blocked the road and are fighting back against local authorities. The situation is heating up. pic.twitter.com/U8jeyFUeQe

The unprecedented protests has prompted one social media account monitoring the Ukraine conflict, @TpyxaNews, to claim the “situation is heating up.”

@Tendar said, “Protests in Dagestan are getting more violent. The Russian regime faces here the strongest pushback so far.

“We are just two steps away from something big.”

Alex Khrebet, a Kyiv Independent reporter claimed that “the final collapse of Russia will start in the northern Caucasus”.