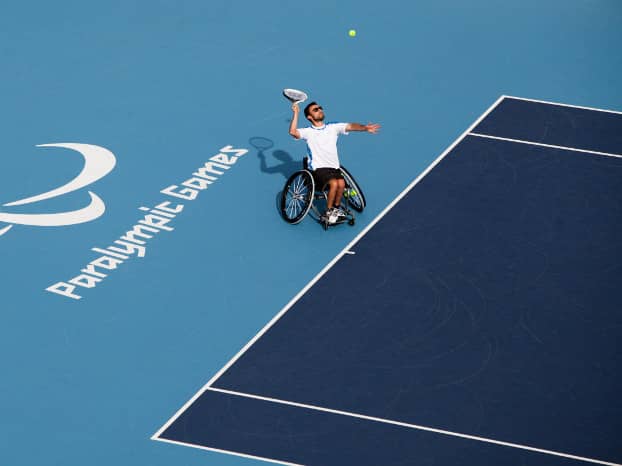 Wheelchair tennis was a big hit at the Paralympic Games. Now the Olympic Park has been awarded the rights to stage the NEC Wheelchair Tennis Masters from 2014 to 2016.

The Masters is the International Tennis Federation’s official end to the year. The tournament features the best eight men, eight women and four quad players according to world rankings. It has been held since 1994 in the Netherlands, then Mechelen in Belgium.

“We are delighted that wheelchair tennis will become one of the first sports to build on the legacy of London 2012 by using facilities at the Olympic Park,” said ITF President Francesco Ricci Bitti. “The NEC Wheelchair Tennis Masters is one of the most prestigious events on the circuit, and its staging in London will help us in our efforts to promote the sport. After the spectacular success of this year’s Paralympic Tennis Event, British fans can look forward to the return of some outstanding athletes to London.”

UK Minister for Sport Hugh Robertson said: “This is another exciting, world class event coming to the country on the back of London 2012. This is great news for wheelchair tennis and will help encourage people take up the sport.”

Geoff Newton, Executive Director of the Tennis Foundation, said: “The Tennis Foundation has been delivering world class tennis events for disabled people for over 20 years, and hosting the NEC Wheelchair Tennis Masters will give us the opportunity to encourage more people to play and watch this fantastic sport.”

Boris Johnson, Mayor of London, said: “One of the most exciting legacies from the 2012 Games is that London now boasts new world-class sporting facilities. This event will play an important role in maximising opportunities to grow participation in the sport as we continue to build the legacy from the 2012 Games.”

Simon Morton, Director of Major Events and International Relations at UK Sport, said: “We are delighted to have secured the 2014 NEC Wheelchair Tennis Masters. This is the second Paralympic event to join UK Sport’s Gold Event Series – and the first to be staged at a London 2012 venue – building on the legacy our home Games.”

Dennis Hone, Chief Executive of the London Legacy Development Corporation, said: “Queen Elizabeth Olympic Park will be one of the most accessible destinations for sport in the country. Securing the NEC Wheelchair Tennis Masters comes at the same time as a successful Inclusive Sport Fund bid that will see over a million pounds invested in sport for disabled people in and around the Park. One direct benefit will be a new annual festival of disability sport starting in 2013.”