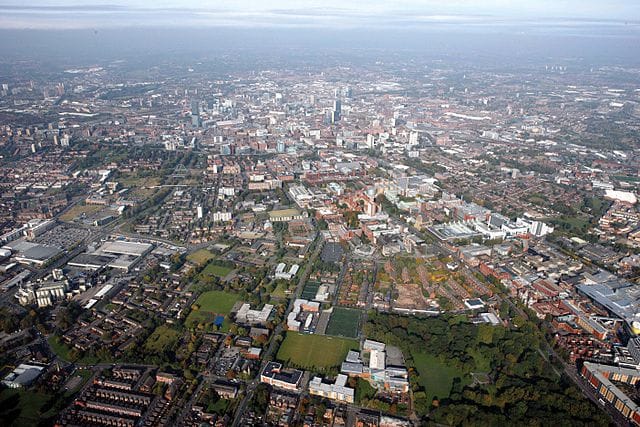 Manchester is a city with a rich heritage, strong cultural and sporting ties and a healthy economy. And over recent years, the jewel of the Northern Powerhouse has grabbed investment opportunities for infrastructure, housing and media, boosting its reputation as a city on the up.

The city’s economic growth is up there with the highest performing cities, not just in the UK, but across Europe. With a constantly increasing population consisting primarily of young professionals and students, extensive infrastructure development and construction, Manchester is one of the most attractive investment hotspots for property investors.

Fastest growing economy in the UK

EY’s annual Economic Forecast predicts a growth for Manchester of 1.2% by 2021, which is the highest rate of economic growth predicted in the country. And the city’s strong economy is shown in the report by a gross value added (GVA) of 2.2%, putting Manchester second only to Reading in the analysis.

These results are backed up by the recent influx of big-name multinational employers, which further boosts the prospects of the housing market in the city. At the end of 2018, TalkTalk moved its headquarters from London to the iconic Soapworks building in Salford. This building was part of a major redevelopment of the area along the banks of the River Irwell and is near to Bupa’s brand-new building.

The BBC also moved much of its operations covering TV, radio and sporting to Media City in Manchester in 2011. ITV has built a brand-new studio across the river from the BBC, and the likes of GCHQ, Amazon and Moonpig have all moved operations to Greater Manchester in recent times.

An inevitable consequence of such a buoyant economy is a youthful and vibrant population. Over the last three years, Manchester’s population has grown by 6% to 572,000, according to Manchester City Council’s State of the City Report from 2018. The report also shows that more than two-thirds of graduates from Manchester’s universities choose to stay on in the city after finishing their studies.

The ensuing boost in demand for rental property has led to yields of more than 7% in some areas of Manchester for buy to let. Manchester is so popular with students that more than a third of graduates return to live and work there after studying elsewhere. In addition, more than two-thirds of graduates from the city’s universities choose to stay on to develop their career in the area.

According to data from global real estate agency Cushman & Wakefield, house prices in Manchester can be expected to rise by almost 57% by the end of 2028. This phenomenal prediction is the highest in the report for all UK cities, and shows the confidence in Manchester’s property sector.

Manchester’s population is predicted to reach 644,100 by 2025, showing clear room for growth over the next decade, boosting predictions for both housing and rental prices. A report from Savills also expects house prices to rise by 21.6% in Manchester and the North West of England, between 2019 and 2023.

Both of these predictions firmly flip the traditional housing price rules on their head, with the north of the country flying high and the south east losing value. Similarly, rental yields are expected to rise rapidly thanks to a booming market and plenty of demand. A report from the Manchester Evening News reveals that the average rental cost in the city has risen by almost a third since 2014. For tenants, Manchester is one of the priciest borough in the wider district of Greater Manchester, matching Trafford at £775 per calendar month based on figures from Q3 2018. This reflects an increase of 7% on the same period for 2017.

Construction and development projects in Manchester

More than a fifth of the population in Manchester works in the professional, scientific and financial sectors. There is also a fast-growing digital sector, with the city’s economy continuing to diversify. This is drawing more young professionals into the city, looking to benefit from the wide range of employment opportunities available in Manchester.

The growth of the tech sector in Manchester is also driving demand for high quality office space in the city. The surge in demand for residential property and office property has led to record levels of construction development projects in the city.

A glance at the city’s skyline gives an immediate view of the region’s regeneration over recent years. This is partly due to the funding (around £366 million) allocated to Greater Manchester for regional development from the European Structural Funds programme. The net result is a transformed and economically strong city.

These economic and population increases lead to an ever-increasing need for more housing, infrastructure and transportation improvements. The Greater Manchester Combined Authority is responding to these demands, with plans for an expansion of the Metrolink in various areas. This will increase the number of tramlines and implement a tram-train system, which will further boost transport links for the busy professional and retail sector.

Another part of the Greater Manchester Spatial Framework announced by authorities includes the delivery of a minimum of 201,000 new homes by 2037. This will match Government targets for new housing in the country and represents investment opportunities in the centre of Manchester as well as in areas including Salford, Trafford and Oldham.

Exciting residential property developments are underway across the city. Projects like The Loom, Vulcan Mill, in Manchester are revitalising old buildings in this historic city, to provide modern, stylish accommodation for the vast numbers of urban professionals moving in. Offering investors gross expected yields of up to 5.6%, this development is an excellent example of the future of Manchester residential accommodation.

There is no doubt that the property sector in the UK is strongest in the north and central regions of England. Manchester offers property investors the strongest likelihood of increasing yields in an economically strong city. The future for Manchester is bright.