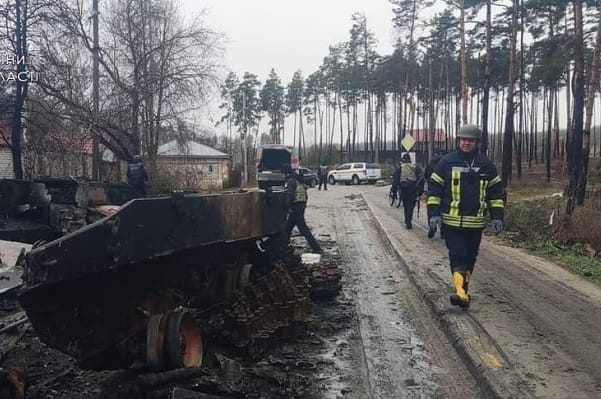 The United Nations high commissioner for Human Rights has said on Monday that all the bodies of Ukrainian civilians must be exhumed to be identified and establish the “exact cause of death.”

Michelle Bachelet, the UN high commissioner for human rights, has issued a statement saying that this needs to be done in Bucha to ensure that possible war crimes can be fully investigated.

Bachelet said, “I am horrified by the images of civilians lying dead on the streets and in improvised graves in the town of Bucha in Ukraine.

“It is essential that all bodies are exhumed and identified so that victims’ families can be informed, and the exact causes of death established.

“All measures should be taken to preserve evidence.”

Bucha massacre proves that Russian hatred towards Ukrainians is beyond anything Europe has seen since WWII. The only way to stop this: help Ukraine kick Russians out as soon as possible. Partners know our needs. Tanks, combat aircraft, heavy air defense systems. Provide them NOW. pic.twitter.com/LX5S3KVrwD

On Sunday the Ukrainian Foreign Minister Dmytro Kuleba has called on the International Criminal Court (ICC) to head to Bucha, northeastern Ukraine to investigate war crimes committed by Russian forces after they discovered “mass graves.”

Ukraine authorities have found  scenes “hard to describe” with dead bodies of “executed civilians” and “mass graves” in areas that have been liberated from Russian control.

Dmytro Kuleba said that the “Bucha massacre was deliberate. Russians aim to eliminate as many Ukrainians as they can.”

The press service of the Ministry of Foreign Affairs of Ukraine quoted the words of Kuleba, said by him on the air of the British radio Times UK radio, on Sunday.

Kuleba said, “I call on the International Criminal Court and international organizations to send their missions to Bucha and other liberated cities and villages of Kyiv region, in order, in cooperation with Ukrainian law enforcement officers, to collect as thoroughly as possible all the evidence of Russian war crimes.”

“We are still collecting and looking for bodies, but the number has already gone to hundreds. Dead bodies lie on the streets. They killed civilians while in these villages and cities, and also leaving them,” Kuleba added.

He also said that Russian forces are guilty of mass crimes in Ukraine, which includes “murder, torture, looting, rape.