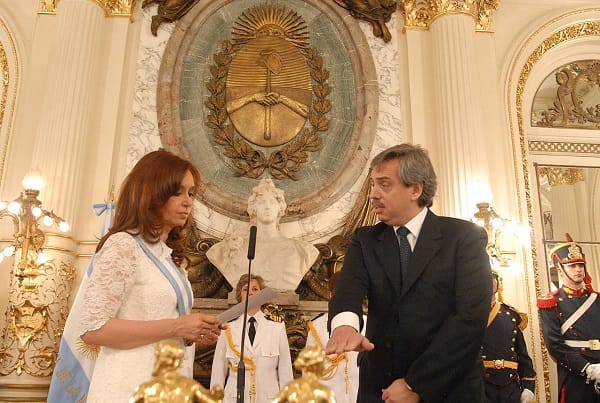 Falkland Islands under threat as Argentina vows to fight for them

Argentina’s new President Alberto Fernandez has vowed to fight for the Falkland Islands sovereignty and will reclaim the Islands from the UK as a “matter of state.”

He previously accused his predecessor of not working hard enough allowing the UK to continue its progress on their land.

He said, “The lack of a state policy on the Malvinas allowed the United Kingdom to continue its progress on these lands and the sea.

“Unfortunately, in the four years of the previous administration there was a certain setback because the government did not give emphasis to the claim of Argentine sovereignty in those lands and in the adjacent sea.”

He accused the British government of “usurping Argentine lands” and said they will not ask the UK for permission in their campaign.

President Fernandez told journalists, “We are going to continue demanding what belongs to Argentina.

“We will do it peacefully and with international organisations, but we will never stop doing it.

“At this point, I am not asking permission from the United Kingdom because they are the ones who are usurping Argentine lands.

“We are not going to give in, give up or have good manners.

“We want to turn Malvinas into a matter of state, and we will not stop claiming our right until we recover the territory.”

The Ministry of Foreign Affairs said in June, Argentina permanently exercised its rights over the islands but on January 3, 1833.

“The effective exercise of sovereignty was interrupted by an act of force by the United Kingdom, which expelled the Argentine authorities and the people of the islands.”

They added, that “through this usurpation, the territorial integrity of Argentina was broken, a situation that no Argentine government has consented to in more than 187 years of history.”

On the 2 April 1982 an undeclared war between Argentina and the UK broke out lasting 74 days and the Argentinian government surrendered on 14 June.

Argentine forces mounted an amphibious landings on the British territory and the invasion was met with fierce force by the British Army, Navy and Air Force.

This has sparked decades of protracted disputes over the territory and still maintains that the Malvinas belongs to them.