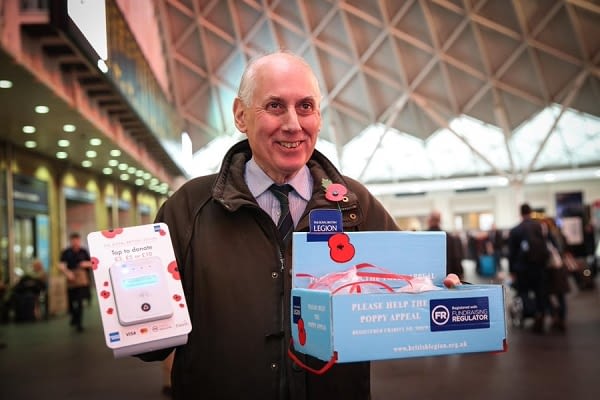 Elavon, a leading payments company, is supporting The Royal British Legion’s Poppy Appeal by providing 1,100 cashless terminals to help the charity collect donations. This effort marks the largest-ever deployment of cashless terminals for a charitable campaign in the United Kingdom, maximising fundraising potential with ease.

By making additional payment options available, more people can donate to the Poppy Appeal without using cash in UK cities. Passers-by will be able to donate with their bank card, mobile or smartwatches.

Simon O’ Leary, Assistant Director of Fundraising for The Royal British Legion said, “This is an exciting step for us. Often, people want to donate but can’t as they don’t have cash handy. By working with Elavon, we can make it simpler for the public to support our Armed Forces community.”

Hannah Fitzsimons, EVP and General Manager of Elavon Europe added, “We are very proud to support this year’s Poppy Appeal. As consumer behaviour and cash use changes, we want to be at the forefront to help important charities like the Royal British Legion maximise their revenue potential to provide vital assistance to people in need.”

Elavon’s UK employees will be volunteering for London’s Poppy Appeal Day on 31 October.

According to recent research by UK Finance Payments Market Report 2018, four in ten payments in the UK were made by debit card, highlighting the significant growth of card payments and a decline in the use of cash. Over the past few years, donations collected by charities in public spaces such as high streets, shopping centres and railway stations have fallen as fewer people carry cash. By providing more digital payment options, charities such as the British Legion can increase revenue and simplify administrative efforts.

Santander UK, which offers banking services to many leading charities, facilitated the collaboration between Elavon and The Royal British Legion.

Olivia Moorby, Head of Charities London & South East, Santander UK added, “The Poppy Appeal is a cornerstone for British people, and a time to reflect on the sacrifices made by servicemen and women. The introduction of contactless payments by the British Legion is on a larger scale than that previously undertaken by any UK charity, we see this as a step change for charities looking to move with the times.”