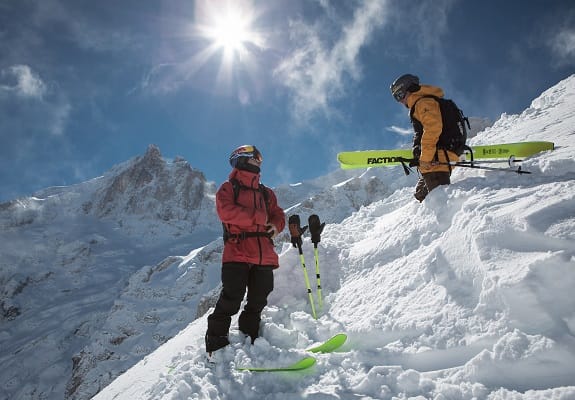 Over 400 investors have invested big and small, making Faction majority-owned by our skier fans.

Faction, the disruptive ski and outdoor clothing brand is not just peaking investment interest but is also winning on the alpine podiums this season. Faction skis at the X-Games in Aspen won seven medals, with Kelly Sildaru with an unprecedented 99 score, and the first athlete to ever have won three medals in one single X-Games.

Faction is on a winning streak, having just closed a £4m investment in December, with 40 existing investors, and 39 new investors; and offers the added incentive that it is EIS-qualifying for UK investors. They are now running an additional Crowdcube raise of £500,000 and have achieved 80% of their target within the first ten days.  Faction has always had a unique shareholder story; Octopus Ventures has invested in it and supported its growth since 2012, but the majority of its backing has come from over £10m invested by angel investors, who are all part of the ‘Faction Collective.’

The Faction ski brand is uniquely headquartered out of London, with CEO and co-founder Alex Hoye’s experience in public listings and private equity.

Faction is accelerating towards a public listing Hoye said, “Faction’s DNA since inception has been to do things better and differently. Faction’s goal is not to become a mass market player, losing margin and quality for market share. With a lean, global infrastructure, we can achieve scale with strong profit margins with less than 3% market share and will exceed its ambitions if our fans continue to prioritise quality and experience.”

Faction is on a steep growth trajectory and industry-leading margins suggesting a €100m valuation at standard revenue multiples within four years. The alpine brand has successfully delivered €5m in revenues in the first half of this fiscal year, and EBITDA losses have halved as investment continues in building a global sales operation.

Faction is the ultimate disruptor in ski and outdoor clothing bridging the gap between slow-moving mainstream ski brands and a new breed of progressive skiers. With a global platform, they sell their gear in 35 countries and create media content to inspire their fans to explore nature’s playground.  From 190 pairs in 2006, last year they produced 30,000 pairs of skis, which were sold by over 600 retailers and online. Pre-season orders were also up 40% since 2017, with most of the revenue being pre-booked.

They have taken a unique path, investing in in-house engineering, in-house media production, and an in-house sales team on-the-ground from Åre to Zermatt, Tokyo to Tirol, Vail to Val d’Isère. Faction is striving to create a new benchmark for mainstream ski brands by delivering quality and messages fans care about. Their executive team has wide expertise, and their Alpine R&D designs with Swiss and Austrian engineering and advanced materials to deliver exceptional quality and great-looking products. For the Winter 2019/2020 season, Faction is launching Alpine outerwear with a range entitled ‘FW: Gear for Alpine Living.’

As part of their DNA of keeping things fresh, Faction doesn’t let their skis retain the dated style of the bigger brands, which were mostly founded between 1935 and 1954 and reflect the era of general brand positioning today. Taking inspiration from the sneaker and fashion collaborations, Faction focuses on artist and core brand collaborations beyond skiing.

Traditionally the market was made up of 20% racing, 80 percent traditional skiing, but there has been a significant shift to 12% racing, 50% all mountain, and the remainder is touring, freeride, and freestyle; Faction with its forward-thinking approach is creating a range that meets these evolving consumer demands.

Their media productions and sports personalities connect with and inspire their fans. Stars riding on their products, such as Candide Thovex are constantly churning out world class content that has captured over 100 million views. Faction’s first full length movie had over one million views in person and online. Their athlete team tops podiums regularly including gold and silver medals in the Olympics, plus the X-Games standouts. Women, who make up 40 percent of ski buyers, offer a major growth opportunity.

Future market opportunities also include expansion into China, where government mandates and the Beijing 2022 Winter Olympics is driving growth. The Chinese skiing boom has already fuelled the construction of more than 700 domestic indoor and outdoor ski resorts. In the lead up to the 2022 Beijing Winter Olympics, President Xi Jinping has stated his intention of 20 percent growth in skiers each year reaching over 100m by the Games, and 300 million skiers by 2030. In 2018 Amer sports, which owns the Atomic and Salomon brands, was reported as having been offered USD $5bn for the company, and Rossignol received a 20% investment by a Chinese private equity fund.

Having invested in a strong foundation, Faction’s focus is now shifting to profit margins, and the management team is driving to a goal of a secondary raise by 2021 and being ‘public listing-ready’ by 2022.