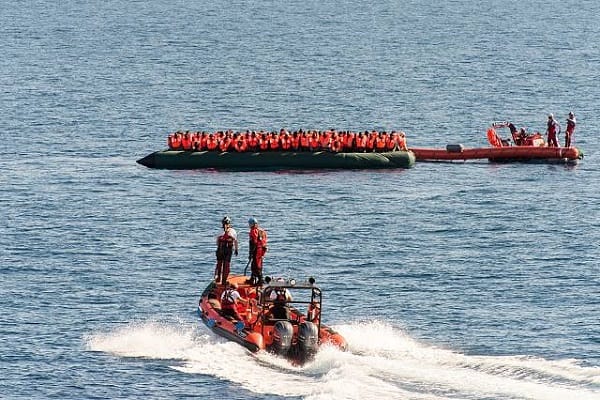 Britain warned of ‘declaration of maritime war’ due to migrant crossings

There have been more than 4,000 migrants who have crossed the English Channel from France so far this year.

British officials, Border Force and the government are trying to combat the crossings and have asked France to do more to prevent them coming over.

The Home Secretary Priti Patel has said she wants to make the Channel path “unviable” and will put an end to the illegal criminal network who are helping to facilitate the crossings.

Patel has said she will ask the Department of Defence to deploy the Royal Navy to prevent the docking of migrant vessels.

However, the former French Ambassador Gérard Araud told the British Home Secretary via Twitter, “Actually, Madam Secretary, as you may know, the cooperation with France was enshrined in the EU rules.

“You’ll have to negotiate a new treaty with your neighbor,” referring to the UK’s departure over Brexit.

The British government have demanded that France does more to return vessels back to their shores instead of allowing them to cross over.

It has been widely speculated and reported that the French authorities are turning a blind eye to the migrants leaving France to get rid of the problems they cause in Calais.

Speaking to France 3 Hauts-de-France, the Mayor of Calais, Natasha Bouchart warned that Prime Minister Boris Johnson’s conduct is tantamount to a “declaration of maritime war” on France.

She hit out at Johnson and said, “Yes, it is a declaration of maritime war.

“The British are creating this call for air themselves by not wanting to review their reception arrangements, by contenting themselves with giving lessons and by subjecting Calaisians to this situation for too long.”

The Mayor of Calais warned the British government that they oppose the migrants being forced back to Calais from Britain.

She hit back saying, that the British government should focus their attention on migration policies.

She added, “It’s like arm-wrestling, it’s what they’re used to doing.

“Technically, I don’t even see how they can achieve this. And I think the Government will be opposed. In any case, we are opposed here.

“But rather than accepting migrants who work illegally, this is in fact their future in England, rather than giving lessons, it would be better than tabling legal texts to review reception conditions in their country.”

On Tuesday the British Immigration Minister Chris Philip held meetings in Paris to discuss a new agreement over the soaring numbers leaving their shores for Britain.

“We are going to be working at pace in the coming days to make that plan a reality.”