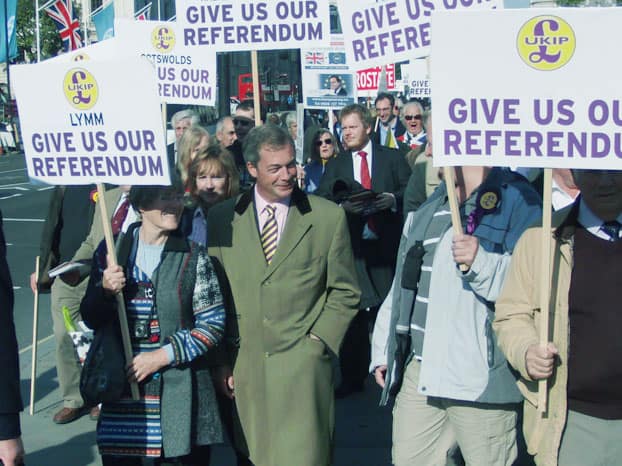 A young Margaret Thatcher would join UKIP not the Tories, says Farage

Giving yet another salacious sound bite to the media, UKIP leader Nigel Farage told the Parliamentary Press Gallery yesterday that a young Margaret Thatcher would have joined his party.

Farage said that if Thatcher was starting her career today, she wouldn’t “join the Conservative Party led by David Cameron” but get involved in UKIP and “topple” Farage in a year.

“Who is the heir to Thatcher? Is it David Cameron? Good God, no. Most certainly not,” he asked

“She was about leadership. He appears to be far more about followership.” Ukip was the “true heir” to Thatcher on the issue of Europe, he said. “What is clear is that Margaret Thatcher from the mid-1990s thought this country should leave the European Union.”

But Tory MP Conor Burns, a friend of the late Baroness Thatcher, said: “Sadly for him, Margaret Thatcher was a tribal Conservative throughout her life and died a Conservative.

“Having talked to her in recent years, she felt strongly that only the Conservative Party was a big enough vehicle to achieve the agenda that she would have wanted in the future and it did throughout her long career in the past.”

At the gathering, Farage also admitted to visiting a lap dancing club in Strasbourg saying he was taken “unwittingly” by a candidate for the French presidency.

“I had no idea where we were going and we walked through the door and I thought: ‘Bloody hell, this is pretty good here, I like this’. But the fact that a Ukip candidate runs a lap dancing establishment sounds to me that he is a free market entrepreneur,” he said.

Galloway: Nigel Farage is in my league but “not as good”