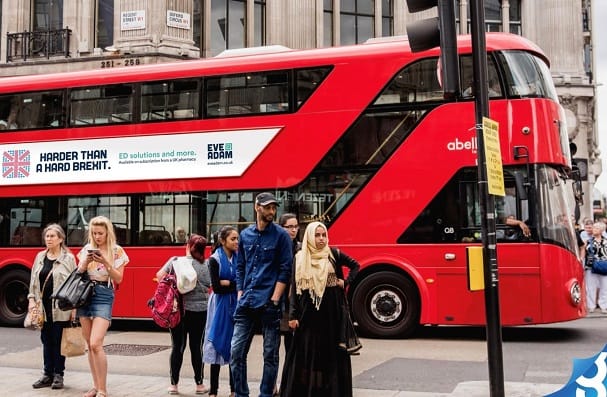 To coincide with both the release of their new website and Brexit, EveAdam has launched their eye-catching HARDER THAN A HARD BREXIT advertising campaign.

From the 29 December, the ad, featuring blue V—– pills (we would’ve typed out the name of the medicine we mean here, but we didn’t want to land in your spam box) and strips of birth control pills, will appear on London’s iconic red buses.

And from the 4 January, the campaign will also feature on a billboard at the port of Dover, viewable by drivers entering the country through the Channel crossing.

The service, which offers ED treatments and birth control on subscription, aims to change the conversation on more intimate health problems, and encourage ongoing positive discourse around conditions that are difficult to bring up.

Their hope is that featuring their ad on London’s transport network will generate discussion around these issues and encourage people to open up about them with a clinician.

‘We hope that by bringing these often-delicate issues to the fore through this campaign, we’ll help people who are hesitant to go to their regular doctor about them to take action, and get the help they need.’ said Clinical Lead Dr Daniel Atkinson.

‘With problems like ED, many men struggle on for months or even years in some cases, without really understanding the emotional toll the condition can take – not just on them but on their relationships too.’

‘And with contraception, many women don’t want the hassle of making a GP appointment if they’ve been muddling through for years on a pill that isn’t right for them, and just want to know what other options are out there.’

With the UK leaving the European Union on the same week that their new platform was released, and the year of coronavirus now hopefully behind us with a vaccine on the horizon, EveAdam are utilising Brexit as a theme to bolster the idea of making a fresh start.

‘We feel like the events of this year have instilled a desire in the British public to make a fresh start.’ commented Dr Atkinson. ‘But we also feel like the events of 2020 demonstrated why good health is so important. So we want 2021 to be a fresh start for people’s attitudes towards their health. A time where people pledge to ‘take back control’ of their wellbeing, and stop putting up with more intimate problems just because they feel like they have to.’

The billboard at Dover launches on the 4 January, and is set to be in place for several months. Because so much attention from around the world has been focussed on Dover during recent weeks, the people at EveAdam thought it would be another ideal place to feature their campaign.

For drivers entering the UK through the port of Dover, the ad featuring ED treatment and strips of birth control pills will be the first thing they see.