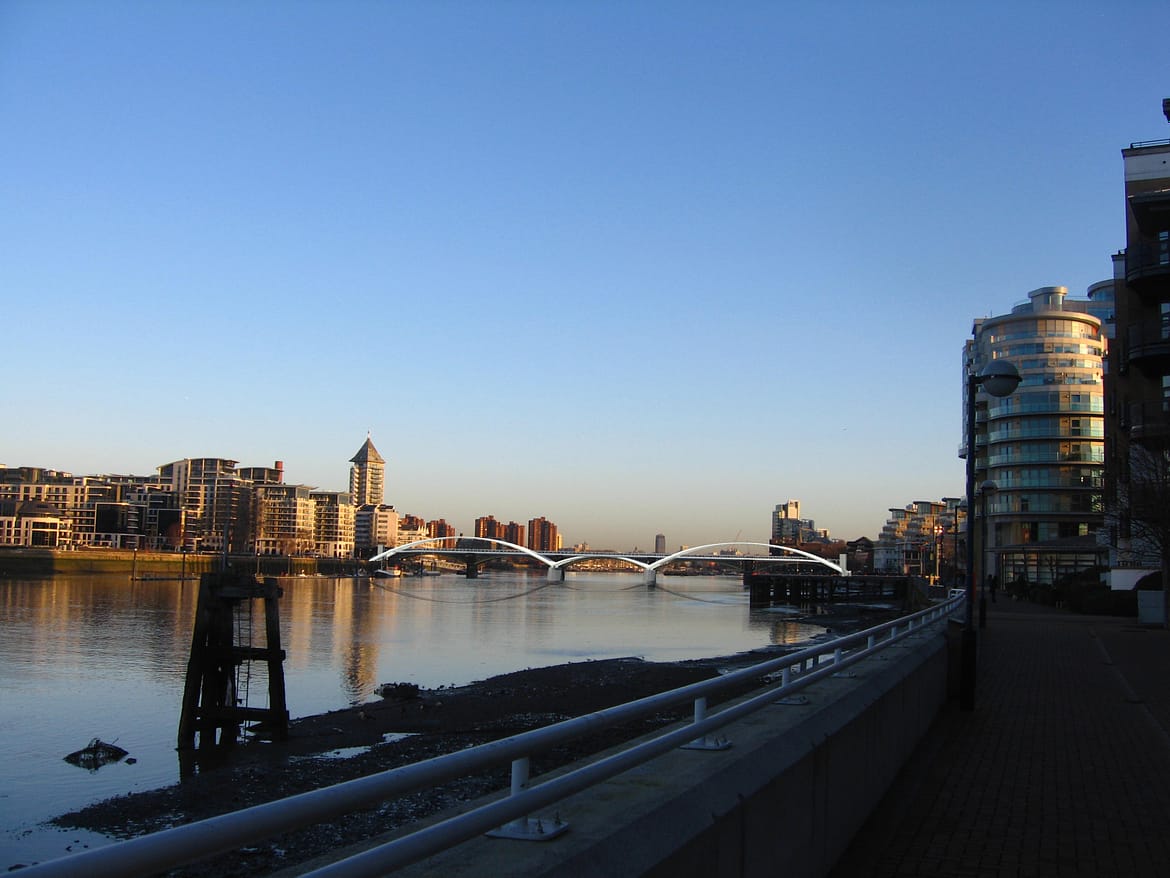 The new Diamond Jubilee bridge between Wandsworth and Chelsea

Here is everything you need to know

Since February, Wandsworth Council have taken a lead role, One World Design has granted the design licence to the Council pro-bono in order that they can progress the project. The bridge now finds itself in a holding pattern with conversations occurring between Wandsworth and Hammersmith & Fulham Councils, central government, TfL and the Mayor of London. Essentially the key question it seems is no longer if the bridge will be completed, it is a question of when.

The key inhibiter to immediate progress is funding. Around 30 – 40 per cent of the funding is in place and that other funding streams are being investigated with efforts by Wandsworth and Jane Ellison MP in particular. The bridge is public and would be owned and maintained by the council and does meet the criteria for TfL funding. The Mayor of London remains supportive but has said that in terms of funding, even though the TfL business case and cost review was favourable, his priorities are Eastward. Ultimately the priorities of TfL are dictated by the Mayor.

Our ambition has always been and remains that the Diamond Jubilee bridge is paid for predominantly by private sector investment. With this in mind we have again turned our attention to assisting Wandsworth by raising the profile of the bridge in order that a commercial partnership may be established, perhaps with an individual or company that would be granted the naming rights. We have investigated options such as appointing a sponsorship agency but this is not feasible due to the high upfront costs they demand. Instead we are reliant on social media, word of mouth and the steady build-up of positive press articles. We understand that this is a slow and unreliable form of fishing for backers but have no other viable options at the moment.

The recent apparent demise of the Garden Bridge and the relaunch of the Nine Elms Bridge proposal has meant that new river crossings are a hot topic. The Diamond Jubilee bridge has been mentioned in some of the press and won a recent poll by BD magazine which asked its readers what bridge they felt was most deserving to be built. The link to this article can be found here

The Bridge currently known as the diamond Jubilee (Cremorne foot and cycle) bridge will have over 1.5m users per annum (according to independent business case) and will link Chelsea Harbour and Imperial Wharf with Battersea in central London. It has planning consent and has started on site. It is already around 30 per cent funded. There is a chance now for the right partner to leave a legacy like no other and ensure their place in history by sponsoring and naming a popular, environmentally beneficial and beautiful bridge in the heart of one of the world’s greatest cities.

What is on offer

We have taken this much-needed project to this point because this bridge is wanted by the people and businesses that live and work here. It is the only bridge proposal in London that has such a weight of public support. We are now at a critical junction in the bridges funding and believe that for the right company or individual the bridges sponsorship and naming rights will offer a fantastic and once in a lifetime opportunity to put their name on the capitals map forever.

The bridge will be seen from all angles by thousands daily, from the train passing nearby, the river taxi, the nearby heliport and by its users. Whilst being constructed and opening it will no doubt gin wide press coverage. Even when the initial media coverage has subsided the deck will remain 240m long and 6m wide – that one huge dynamic media space of 1400 sq.m that will be visible at least a potential 14,000,000 times a year.

This is because as well as the 1.4m pedestrian and cycle user that physically walk on it each year the bridge and deck can be seen by passengers on the over ground line that passes immediately alongside the proposed bridge for its entire length. The passenger figures from 2013 for the West London line (per day average) was 31,500, that’s over 11m journeys along its length each year (and it is worth noting that the line has increased in popularity and new stations have opened since 2013).

Nearby Battersea Heliport is London only commercial heliport and has up to 80 take off and landings each day. Helicopters can be as close as 20m from the deck on the bridge. The world’s richest and most famous people use the heliport. The deck is seen from below by passers-by on private vessels sailing the Thames but also by users of the MBNA Clipper Service RB6 which stops at nearby Plantation Wharf on its way between Putney and Canary Wharf. There are 3 services an hour and the boats have a capacity of 220 people (at 50 per cent capacity average that’s 1.45m journeys a year).

Responding to the navigational, riverbank and other site constraints (including the Battersea Heliport Take-off and landing zone) the bridges superstructure is of three-spans supported on four piers, two of which are in the river, aligning with the central two piers of the nearby Railway Bridge. This arrangement gives two longer, outer spans, and one shorter central span.

The bridge spans by means of tied arches with the ties formed by the deck. Residual thrust from the arches, not carried by the ties, is resisted by the abutments and piers. The arches intersect in plan at the centre of each span, allowing the pairs of arches to provide some lateral stability to each other. Below the deck at the river piers, the arches change angle to run parallel to the span of the bridge. This minimises the lateral dimension of the new river piers. The bridge is designed to allow cycling and pedestrian use.

Since that very first meeting in 2011 the grass roots project has had the active support of the local MP’s, councils and the ward councillors. Jane Ellison MP and Ravi Govindia (leader of Wandsworth Council) have both been instrumental in the progress so far.

Since the mayoral election, it has transpired that Boris Johnson wrote a letter of support to Wandsworth which kept the door open for TfL’s involvement and since Mayor Kahn’s election he has responded positively to calls to allow TfL to complete its study and look into options of how TfL could be involved in progressing the bridge although no Mayoral funding is available. The GLA have agreed a cross party motion in support of the proposal, led by Caroline Russell AM.

One world design architects have led a team that includes world class engineers Beckett Rankine and Expedition Engineering through the design process at zero public cost.