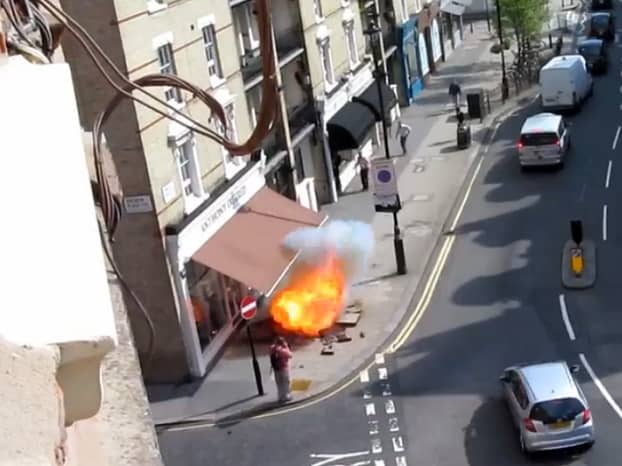 The moment when a Pimlico pavement exploded – VIDEO

Pimlico residents yesterday witnessed explosions which saw flames at least 10ft high erupt into the sky, forming a crater in the middle of the street.

The series of three explosion at the corner of Holbein Place and Pimlico Road are said to have been caused by a faulty power cable.

“There were three explosions. I went to the window and started filming after I heard the first. I didn’t know what it was,” Brook told the London Evening Standard.

“When I saw the second explosion I was frightened. I thought it was going to travel up the road and get worse. I’m just glad no one was killed or hurt.”

A spokeswoman for UK Power Networks, said: “At 10.25am yesterday a fault on our underground electricity network in Pimlico Road interrupted power supplies to 1,867 customers.

“UK Power Networks engineers rerouted supplies to 861 customers within ten minutes and all supplies were reconnected by 1.55pm.

“Safety is our top priority and the cause of this incident is being investigated.

“We apologise to customers for the inconvenience caused by the power cut and our staff restored all supplies as quickly as was safely possible.”