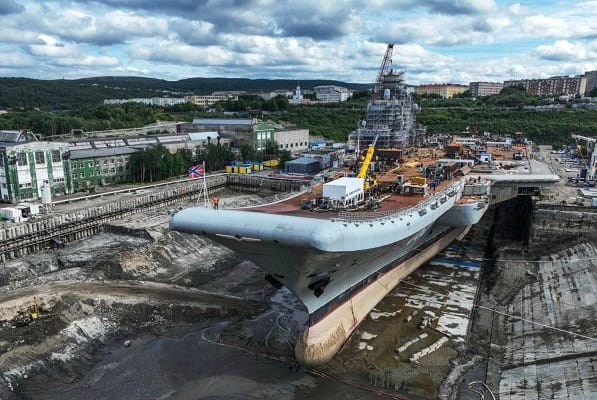 Moscow’s only aircraft carrier is in a “state of emergency” and the ships hull is in “critical condition” which is “filled with muddy water” and could sink where it is docked in Murmansk.

The flag ship of the Russian Navy, the Admiral Kuznetsov is in such a bad state of repair it is “not capable of moving under its own power.”

The Ukrainian Defence Ministry said that Russian ship repair specialists warned the current state of repair the Admiral Kuznetsov is in means that it cannot be moved, and it is “highly likely that it will tip over on its side and drown.”

The Ukrainian Ministry wrote, “Today, the ship is at the 35th ship repair plant (Murmansk).

“In order to continue repair work, a decision was recently made to transfer the ship from dry dock to one of the docks of the ship repair plant.

“However, even at the stage of preparation for moving, it became clear that the cruiser is not capable of moving under its own power.

“Therefore, an attempt was made to move with the help of several tugs. However, this also turned out to be impossible due to the critical condition of the ship’s hull.

“Ship repair specialists warned that the condition of Admiral Kuznetsov in principle does not allow it to be launched. In this case, it is highly likely that it will tip over on its side and drown.

“When the diving teams examined the hull of the ship, it was found that the metal structures below the third deck were exposed to significant corrosion.

“The holds are completely filled with muddy water, which makes a detailed examination of the ship from the inside impossible.”

The Ukrainian intelligence update added, “Officials of 35 ship repair plants and fleet management are trying to shift responsibility for the current state of affairs to each other.

“Currently, it is impossible to even establish who exactly made the decision to move the ship.

“The command of the fleet imposed fines of one and a half billion rubles on the management of the plant for the disruption of repair deadlines and non-fulfillment of the contract.

“In turn, the company’s management published a letter in which it is stated that the plant is not to blame for bringing the ship to its current deplorable state. With a high degree of probability, the military representative at the plant, which supervised the progress of the works, is found guilty.

“According to the available data, there is not even an approximate time frame for the completion of the repair of Admiral Kuznetsov and its return to service.”