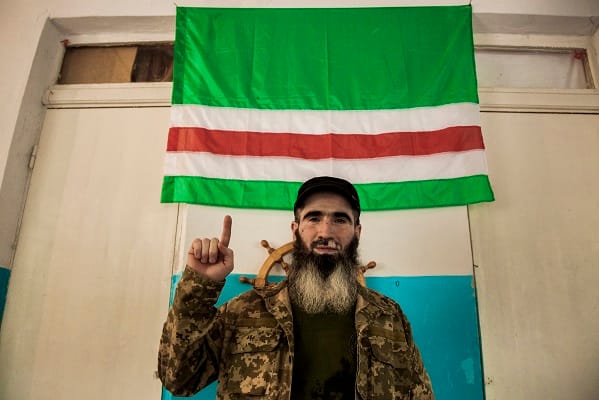 Vladimir Putin’s brutal Chechen fighters known as the “kadyrovsty’ are executing “heavily wounded Russian soldiers,” in Bucha on the outskirts of Kyiv.

The Chechen warriors are operating “penal battalions” which was a “Soviet invention in the Second World War” whereby they shoot dead “unwilling troops.”

The leader of Russia’s Chechnya region Ramzan Kadyrov sent around 1,000 elite fighters to Ukraine and eyewitnesses have come forward claimed that they executed “heavily wounded Russian soldiers” in a “field hospital” in Bucha.

Eyewitnesses and residents of Bucha said that Chechen fighters were killing people in in the northwest town of Bucha.

Deputy Commander of Ukraine’s Territorial Defence Forces, Artem Hurin, was one of the first to visit Borodyanka, northwest of Bucha in April.

“No one other than the Kadyrovtsy did this.”

Mark Voyger, a senior fellow with the Transatlantic Defense and Security Program at the Center for European Analysis, told Express, “What they’ve been doing – apart from the despicable atrocities like rapes and torturing and killing of civilians – it seems that they have been tasked with operating as the so-called ‘penal battalions.’

“It was a Soviet invention in the Second World War for when you have unwilling troops.”

During the Second World War penal battalions where created to control disillusioned troops who were to afraid to advance when ordered by their officers.

Voyger continued, “Since the Russian troops are suffering from low combat morale, especially the new recruits from among the Donbas regions, the Chechens are used as a force to ‘whip’ those new or unwilling soldiers into frontal assaults against Ukrainian forces.

“I’ve read reports where they act as penal battalions holding the line when Russian troops run from the frontline.

“Or I’ve also read about executions of Russian defectors or mutineers – troops that have been hit by mutiny have been dealt with extremely harshly by the Chechens.

“And so they have a special, very sinister role within the Russian military and that’s one of the key tasks they were ‘bred’ for.

“Putin designed the system to have a local governor of sorts in Chechnya who would breed such a force of terror for disposal.”