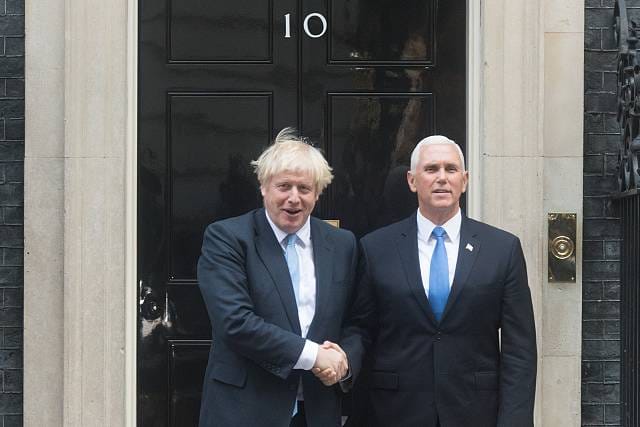 Boris Johnson met with US vice president Mike Pence on Thursday for a post-Brexit trade deal with the US, he warned that the “NHS is not on the table.”

The prime minister said he will not carve up the NHS and said the UK are “not too keen on that chlorinated chicken.”

And in a swipe at Jeremy Corbyn he added, “We have a gigantic chlorinated chicken of our own on the opposition benches.”

Speaking at the White Room in Downing Street he said, “We will drive that free trade agreement and of course the US economy is a wonderful, massive opportunity for the UK.

“But it is still the case, did you know, that the people of the United States of America do not eat any British lamb or beef or haggis from Scotland.

“I think there are still barriers to trade in shower trays, would you believe it, from the UK and many other products where we think we could free up the US market.

“I know that you guys are pretty tough negotiators so we are going to work very hard to ensure that any free trade deal is one that works for all sides.”

The US vice president said, “The president often says the US has the biggest economy in the world and we truly believe that a free trade agreement between the United States and the UK could increase trade between our country by three or four times.

“We are anxious to do that and to stand with you and do everything in our power to strengthen what has been a historic and special relationship between the United States of America and the United Kingdom.

“It is embodied in the very warm and personal relationship that you have forged with President Trump, with myself and our administration.”