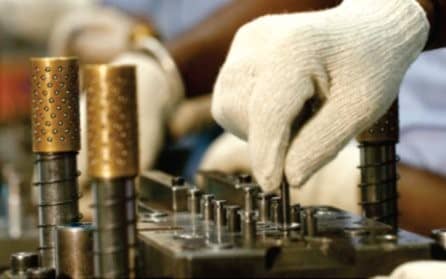 Manufacturing has been a part of human life from times immemorial. The earliest products were perhaps simple tools that were used in hunting and then in tilling the land. As time went by metal forging became a profession in itself with individuals specializing in different metals, such as the coppersmith, the blacksmith, and the goldsmith. Then came the industrial revolution of the late 1700s and it changed the very concept of manufacturing. Now we are more than two centuries past the industrial revolution and mechanization and automation has reached levels that were beyond human imagination at one time.

The advances in technology mean that we have components or items, that range from the simple to the extremely complex, that are manufactured with the help of progressive press tools. The manufacturing process is faster, and immensely more efficient both in terms of quality and quantity. Press tool die designs make it possible to carry out several operations in the manufacturing process with great precision. However, what are progressive press tools?

A press tool works on the simple principle that brute force can be used to shape a piece of metal. Experiments in France have shown that a 54-kilogram crocodile exerts a pressure of 698 kilograms between its jaws. These jaws are one of the most dreaded objects in nature. A press tool on the other hand, while using a similar principle, is nothing to be dreaded if used skillfully and carefully. A press tool can shape a piece of metal. It can perform various functions such as cutting, trimming, punching, coining, bending, and several other operations involved in shaping a metal piece into the desired shape and size.

When a press tool is combined with an automatic feeding system, it becomes a progressive press tool. The automatic system unwraps a strip of metal from a coil and sends it through the different processes. The metal passes through several stations with each station performing one or more operations on it until finally the desired product is cut out of the strip. Since each station performs a progressive step on the metal, it is important that it advances and moves to each station and is positioned very precisely. In order to accomplish this, small conical pilots enter previously punched holes in the metal strip to ensure precision.

Difference between a progressive process and a transfer process

In a transfer process, the metal piece is cut out of the coil early on. Metal fingers are used to move it from one station to the other. A progressive press tool process is used in mass production. The production time is shorter and the speed is much faster. However, a progressive process does not allow for certain processes. These are processes where the depth of stamping is more than the diameter of the part. Processes that require the part to leave the strip are not possible with the progressive method. These include actions such as threading, beading and so on. In such situations, a transfer process is used. This is a comparatively slower process.

Irrespective of whether the progressive or the transfer method is used, the press tool die design is crucial to the manufacturing process. It is the die that casts its stamp on the piece of metal, resulting in cutting, bending, piercing and so on. It should be designed to withstand the great stamping force, and retain its sharpness. It should not wear down easily. These are the reasons why press tool dies are designed using tool steel.

A die has to be extremely precise and accurate. A slight flaw or inaccuracy in a die will only be amplified in the final product. That is what makes press tool die design a critical step in the manufacturing process.

At Eigen, each die is a piece of engineering art in itself. Designing and manufacturing progressive press tool dies with the greatest accuracy is what the engineers at Eigen delight in.