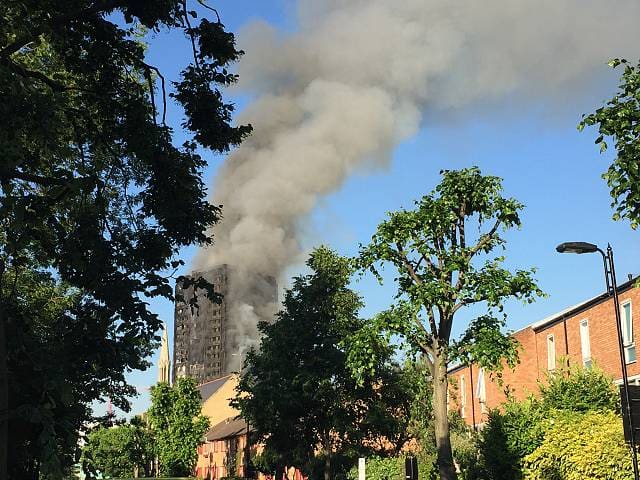 Witnesses have described how people were jumping from windows as high as the fifteenth floor, whilst a mother threw her baby from the tenth floor and thankfully a member of the public caught the baby.

A witness described the scenes as horrifying as the flames engulfed Grenfell tower block from the second floor up “within seconds.”

“I couldn’t believe my eyes. When I came out people in the tower block were waving their phones, screaming ‘help, help, help’”

LondonLovesBusiness spoke to a local resident called Jimbo, he said: “My thoughts and prayer are with all those at Lancaster gardens”.

Describing what he saw, Jimbo said: “Around 5:00am I smelt fire and weirdly it instantly brought back memories from my time of serving in Baghdad.

“I could hear the helicopters and I made a cup tea and then at the back of the house I saw a trail of smoke.

Jimbo was describing his community, he said: “What is really heartening is the way Londoners respond as the community really supports everyone.  A huge collection is under way for those affected. People have been buying nappies and the local super market has sold out.

He added: “Those people that have been left homeless, it is now down to us and the wider community to help those in their hour of need.”

A witness called Samira Lamrani said: “The windows were slightly ajar, a woman was gesturing that she was about to throw her baby and if somebody could catch her baby.

“Somebody did, a gentleman ran forward and managed to grab the baby.”

She added: “My daughter’s friend said she observed an adult who made some sort of homemade parachute and tried to lower himself out of the window.

“The more I looked up, floor upon floor. Endless numbers of people.

“Mainly the kids, because obviously their voices, with their high pitched voices – that will remain with me for a long time.

“I could hear them screaming for their lives.”

Another witness called Daniel said to the BBC: “Nobody could come out, they were trapped in there. They couldn’t come down because the lift’s the other side.

Jody Martin a firefighter who was the first on the scene said to the BBC: “I grabbed an axe from the fire truck, it looked like there was a bit of confusion about what to do.

“I eventually gained entry onto the second floor, and once I got to the corridor I realised there was so much smoke there.”

Martin added: “I watched one person falling out, I watched another woman holding her baby out the window … hearing screams, I was yelling everyone to get down and they were saying, ‘We can’t leave our apartments, the smoke is too bad on the corridors’.”

Another resident, Zoe, who lives on the fourth floor, said she was woken by a neighbour banging on her door.

“The whole landing was thick with smoke. The smoke alarms weren’t going off but the way it spread so quickly from the fourth floor, all the way up to the 23rd floor was scary.”

It is still unclear as to what caused this horrific fire and all we know is that six people have been confirmed to have lost their lives.

Earlier Wednesday afternoon the mayor, Sadiq Khan said that this is now a recovery operation.