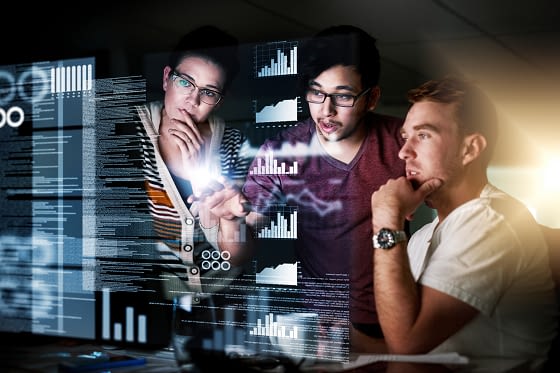 In 2020, the world is in the midst of the Fourth Industrial Revolution (FIR). Think of it as a way of describing the current cycle of technology today. Boundaries between digital, physical and biological worlds are blurring, with the advancement of robotics machine learning, artificial intelligence (AI), genetic engineering, quantum computing and other tech.

N’Gunu Tiny, CEO of the Emerald Group and Fintech expert says: “All the way through history, we’ve been dependent on technological advancements. And while the tech of each era looks different, it has the same kind of massive impact. Technology exists to make our lives easier, better, faster and to take our species to the next level.”

Here’s what brought us here, from the first Industrial Revolution to the development of blockchain and Distributed Ledger Technology (DLT).

Towards the end of the 18th century, the First Industrial Revolution heralded massive changes primarily in mechanization of industry. This eventually superseded agriculture as the economic backbone of the economy. For people at the time, the rapid extraction of coal and invention of the steam engine together created the energy that powered the railroads and accelerated the economy.

Around a century later towards the end of the 1800s, the Second Industrial Revolution saw a new wave of technological advancement across industries that led to the emerging energy sources of oil, gas and electricity. People witnessed the invention of the internal combustion engine, the development of the steel industry, unprecedented methods of communication including the phone and the telegram, and chemical synthesis. By the end of the 20th century, the second industrial revolution saw the invention of the plane and car.

The Third Industrial Revolution came in the mid-20th century with the emergence of nuclear energy, telecommunications, computers and electronics. The doors opened to space travel, biotechnology and all kinds of research that had never been possible before. Robots and Programmable Logic Controllers (PLCs) meant high levels of automation in manufacturing and producing goods.

N’Gunu Tiny explains: “All of this brings us to the Fourth Industrial Revolution, and it’s something we’re living through every day of the 21st century. The beginning of this tech cycle began with the Internet, the development of VR and AI and more recently DLT and blockchain.

“Cryptocurrency and blockchain tech have kicked off fiercely argued debate over the last five years, and while there is much to discuss about their longevity and investment potential, below I’m going to look at the tech behind them.”

Investing in disruptive technology as part of the fourth industrial revolution

Mr. Tiny’s investment group, The Emerald Group, focuses on fintech investment. He says: “We aim to not only act as a trusted partner and meet investor objections, but also to contribute to the financial inclusion of individuals and businesses around the world. To do this, we select the ideal investments and choose the best partners to create and implement disruptive tech solutions to aid countries in transitioning towards a digital economy.”

Disruptive tech – think Deliveroo, Uber and Netflix – are about changing approaches to business models, cutting costs and improving customer experience. By using tech to remove unnecessary costs, investors can focus on more competitive products. The Internet has totally transformed the way information is gathered and communicated. And one of the simplest ways to understand blockchain technology is as a natural extension of this and it centers around the transfer of other assets – money rather than information.

The Internet works perfectly to efficiently and, subject to the correct cyber security, safely transfer all kinds of information, from music and movies to pictures and documents. But it wasn’t designed to send or transfer cash. Explains N’Gunu Tiny: “The biggest issue with transferring money online is how certain we can be that the person at each end of the transaction is legitimate. This has made us reliant on 3rd parties such as banks to ensure verification. Peer-to-peer (P2P) transactions on the Internet of yesterday could never be truly without barriers, like a cash payment in a physical shop.  Blockchain technology solves this problem, as it allows P2P transactions with independent and thorough verification.”

How does blockchain and DLT work?

Blockchain can be thought of as a ledger accounting book. It’s in the form of blocks that are interconnected. Each block stores data and can be distributed across several networked computers. Cryptographic tech ensures encryption and inviable security, which reduces risk. This Distributed Ledger Technology (DLT) can be defined as:

The main positives of blockchain technology are:

One of the biggest problems facing blockchain tech is its relatively slow adoption by governments and corporate entities. The biggest barrier for most is privacy. Given the decentralized nature of the tech, this has naturally caused concerns regarding security. To tackle this challenge, the Emerald Group we carried out research surrounding different delivery methods of DLT. N’Gunu Tiny says: “From this we decided to partner with HBK GoChain, for two reasons: their pioneering Proof of Work concept and their blockchain design.

GoChain is the first company in the world to build a fully integrated blockchain layer, which is complemented by a Service and Application layer, effectively creating a ‘Plug and Play’ option. As it’s built in three layers, it’s simple to build applications using it for corporate services, financial companies and governments. Based on a closed-circuit protocol, that restricts nodes on the network to a selected number of partners, it combines the benefits of DLT with added security.

“GoChain Blockchain has been designed specifically for various e-gov solutions including: National identity, issuing visas, voter registration and elections, HR, law enforcement and judicial system, central banks, e-payments, customs & trade, healthcare, education, security and agriculture.  I’m excited as an investor, and as a follower of disruptive tech, by the advancement in blockchain and DLT, and the impact it will have for us all.”