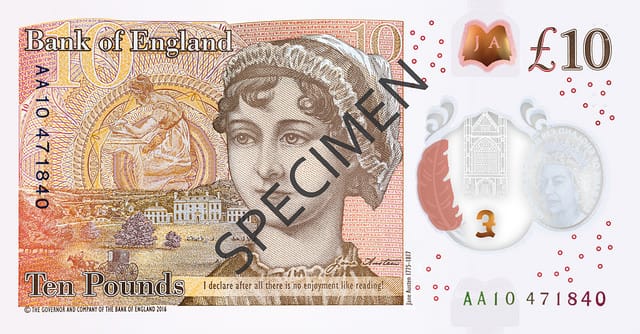 A new polymer £10 note featuring author Jane Austen has been unveiled by the governor of the Bank of England on 200th anniversary of her death.

Mark Carney revealed the note at Winchester Cathedral, where Austen was buried after she died, and said: “The new £10 note celebrates Jane Austen’s work. Austen’s novels have a universal appeal and speak as powerfully today as they did when they were first published.”

The note which is due to be issued on 14 September also has new ‘tactile feature’ to help those who are visually impaired.

The note will be made with the same polymer material as the £5 released year, which sparked an outcry among animal rights and vegan campaigners and some religious groups as it contains tallow a form of animal fat.

A limited supply of a new £2-coin honouring Jane Austen has also been put into circulation by the Royal mint. Designed by Royal Mint graphic designer Dominique Evans its features Austen’s silhouette, set in a period frame overlaid by her signature on a backdrop of regency wallpaper.