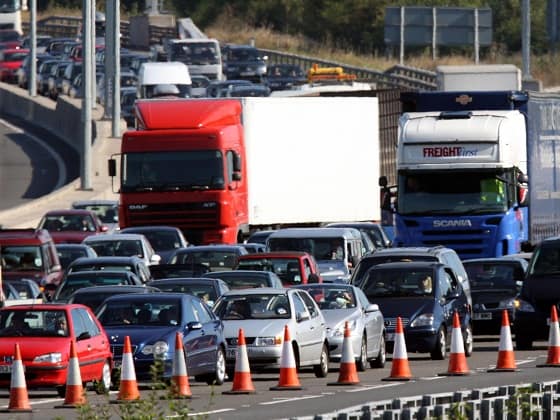 Roadworks cost London £750m a year, but Boris has a plan to slash this cost. Will it work?

Yesterday we released our extensive research that found 57 per cent of London business leaders want reduced roadworks disruption to the next mayor’s number one transport priority.

How much does the state of London’s roads damage its economy – and its businesses?

London needs nine years and a further £97m to sort out its roads.

Filling a single pothole on a high-speed road costs highway authorities between £500 and £1,000 in management fees alone.

It gets worse. While we swerve and curse the tens of thousands of craters that plague our city’s streets, on any particular day there are 5,000 much bigger holes wreaking havoc – roadworks.

Roadworks and potholes: The hard facts

According to TfL, London is home to around 20 per cent of the UK’s traffic congestion, costing the capital’s economy £2bn a year. About £750m of that is estimated to be caused by roadworks.

According to the Asphalt Industry Alliance (AiA), poorly maintained roads cost UK SMEs £4.8m every year. Considering that London accounts for 21 per cent of the UK’s economic output, a hefty slice of that £4.8m is a cost to Londoners.

Charlie Mullins of Pimlico Plumbers is one of those paying. He estimates that the time his engineers lose to roadworks costs his firm up to £3m a year. And he’s fed up.

“I’ve never seen anywhere else in Europe that is as bad. It’s gone on too long. There’s got to be a better scheme – do it late at night.”

What’s being done about it?

TfL says that around 50 per cent of roadworks are created by utility companies. In an effort to reduce this number and put an end to headlines berating the number of times the same road is dug up, the mayor launched the London Operational Permit Scheme (LoPS) in January 2010.

The LoPS replace the previous noticing system, which allowed utility firms to “dig up the road with reckless abandon”, as Boris himself has put it.

Fifteen boroughs, the City of London and TfL take part in the LoPS, which obliges utility companies to apply for a permit before they can carry out excavations in participating boroughs.

To discourage any “permit-banking”, the permits come at a price: between £40 and £240, depending on the type of work and location. Crucially, permits must be paid for regardless of whether the work is carried out.

As for work performed without a permit, that’s eligible for a fixed penalty of up to £5,000.

Is the LoPS working?

Boris thinks so. The London Permit Scheme Evaluation report was published in May. Findings include:

I contacted Virgin Media, BT Openreach, UK Power Networks, National Grid, Southern Gas Networks and Thames Water, as well as the participating boroughs and TfL, to get their perspective on the scheme.

Virgin Media has applied for approximately 50,000 permits since the start of the scheme and been granted around 80 per cent.

The broadband and cable TV company carries out between 150,000 and 200,000 street works each year and suggests that the one-size-fits-all approach to excavations could be exacerbating the problem – not reducing it.

“We would argue that there needs to be consideration for an exemption for small-scale works that will not affect traffic,” a company spokesman says.

Has the LoPS scheme led to fewer Virgin Media street digs? “No. Last year was down on 2009 but up on 2008. The numbers are pretty consistent,” the spokesman says.

National Grid and BT Openreach declined to comment on the scheme, while Thames Water wholeheartedly endorsed it: “We are fully supportive of the London Permit Scheme and any measures that will help minimise traffic congestion and improve coordination of streetworks.”

But are there fewer roadworks in total?

But, crucially, these also include roadworks undertaken by the highway authorities themselves. So, in the boroughs where road works have increased, utility trenches might be down while borough road maintenance works are up.

It’s no surprise that some firms remain unconvinced by the scheme.

Virgin Media told me: “While well intentioned, for Virgin Media, the scheme is proving bureaucratic and burdensome.

“The vast majority of the permits we’ve applied for are for small excavations (often only a few inches wide) on pavements right next to residential property and typically take but a few minutes.

“If anything, the nature of the scheme is such that we need to send engineers twice – once to survey the site and again to carry out the work – which increases the number of vehicles on the roads and the cost to our business.”

Anyone who breaks the terms of their permit or works without a permit can be prosecuted and face a fine of up to £5,000.

In the borough of Hammersmith and Fulham, where residents are exposed to some of the worst traffic in the city, utility companies forked out an extra £73,000 after they were caught trying to dig up local roads 123 times without permission between the scheme’s inception and September.

“Our members would like to see higher fines for overstaying, more use of trenchless technology, more use of plating over trenches when work is not ongoing”

According to a borough spokesperson, at the end of 2010, “rogue utility companies [were] being slapped with an average fine of more than £500 a day”.

President of roadside assistance firm the AA, Edmund King, has little sympathy: “[Organisations] have had years to get their act together on coordinating and speeding up streetworks but haven’t.

“Our members would like to see higher fines for overstaying, more use of trenchless technology, more use of plating over trenches when work is not ongoing and better quality reinstatement of trenches so as not to cause more treacherous potholes which unduly affect cyclists in London.

“We believe that the Mayor is keen to beat this problem. I still think it is too early to see the real results.”

The London Permit Scheme is really just lubrication for the Lane Rental Scheme that the Mayor and TfL, along with a host of other bodies, are desperately trying to convince the Department for Transport (DfT) to put through.

Unlike LoPS, The Lane Rental Scheme would apply only to the most congested areas, primarily on the TfL-managed Transport London Road Network (TLRN) – which represents just five per cent of London’s roads but carries a massive 30 per cent of its traffic.

If the DfT gave it the green light, the scheme would allow TfL to charge utility companies rent for the roads they work on. The incentive is obvious: the more time they take, the costlier the works.

Overall, TfL believes the scheme could, eventually, deliver a 40 per cent reduction in serious and severe disruption from roadworks on the TLRN – and save London’s economy around £78m a year in economic and social costs.

Presently the scheme is in a consultation process.

As well as being expensive, potholes are also deadly. In the introduction to the AiA’s report on the quality of British roads, Colin Loveday describes a demonstration by an ambulance service trainer that he witnessed:

“He showed what happened when an ambulance went over a pothole while they were trying to resuscitate a casualty.

“it was a shocking example of road conditions being a real matter of life and death.”

So next time you hit a pothole and curse, remember it could be a good deal worse.

How to report it

Dangerous pothole outside your home? Rather not be put on hold by your council yet again? Visit FixMyStreet.com and they’ll report the issue for you.

Just ran over another pothole on your way to work? Then pull over and report it via the FillThatHole app. Part of the CTC cycling network, the iPhone app allows cyclists and motorists to report hazardous spots on the spot.

The ultimate catch-all site for potholes, whether it be claiming against damage caused by one, or revelling in pothole stories, you can do it all here.