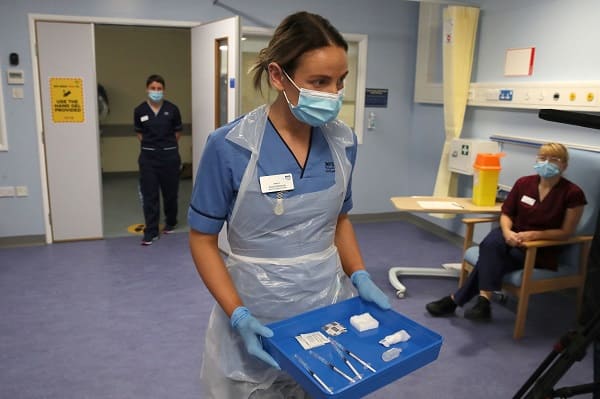 Social care chiefs have urged the government to scrap the mandatory need for healthcare staff to be vaccinated as shortages are “paralysing” health and social care services.

The Homecare Association warned the government has “seriously misjudged” the balance between the mitigated risk and infection which is likely to cause “further serious harm” to older and vulnerable people if home care staff are unable to work.

However, Downing Street has confirmed that there are no plans to make any changes to the mandatory vaccinations for NHS staff.

Chief executive Dr Jane Townson said, “All along, we have strongly supported vaccination against Covid-19, as there is clear evidence it helps to save lives.

“At the same time, we have consistently argued that persuasion would likely be more successful than compulsion in achieving high vaccine uptake, especially among those with genuine fears.

“And we have repeatedly stressed the need to balance the mitigated risk of infection with the risk of older and disabled people going without vital care at home.

“In pressing ahead with regulations requiring vaccination as a condition of deployment in CQC-regulated wider care settings, including homecare, we believe the Government has seriously misjudged this balance of risk.”

Since November 2021 it is has been mad mandatory for care home staff to have both vaccines as a condition of employment.

NHS and other front line health care staff have until the 3 February to receive their first vaccine dose, if they do not then by 1 April more than 50,000 staff face being sacked.

The Prime Minister’s official spokesman said, “It remains the case that we believe that mandatory vaccination is the right approach and there are no plans to change the implementation dates for this policy.

“Health and social care workers look after the most vulnerable people in society who would face serious health consequences if exposed to the virus, and obviously having a vaccination is also a way to ensure fewer staff absences, so a way to further help tackle some of the backlogs we’ve seen caused by staff absences when vaccinations weren’t available.”

He said, “We wouldn’t want to see a single member of NHS staff lost because they weren’t willing to get the vaccination that has been proven to be safe around the world.”

British Medical Association spokesman said, “With more than 99,000 vacancies in the NHS in England alone, to lose more than 50,000 further staff who are yet to receive their first vaccine would be disastrous and would have a devastating effect on patient care when the health service is under the most intense pressure it’s been in modern history.

“We urgently need to see an updated impact assessment on how this policy will affect staffing numbers.

“Ministers must not pursue a policy that risks leaving services untenable, and putting patients at risk.”