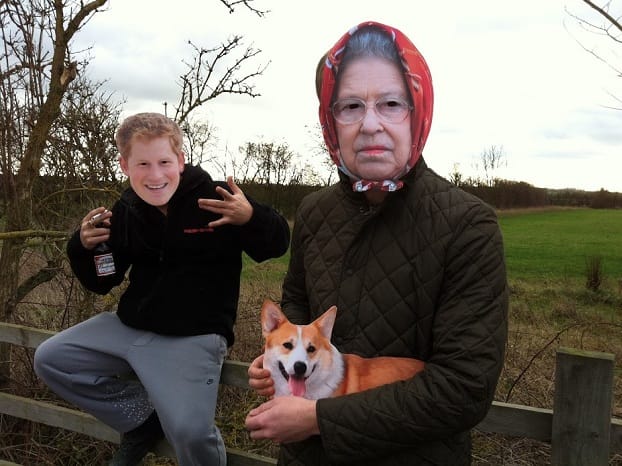 How the “three maskateers” made a £1.5m business out of celebrity cut-outs

Chris O’Nyan, Ray Duffy and Dean Walton might be Dragons’ Den rejects, but their celebrity masks sell like hot cakes. The “three mask-eeters” sold over 250,000 royal masks during the Royal wedding and 750,000 masks during Diamond Jubilee celebrations.

Oh! And Prince Harry wore one of Mask-arade’s Prince William masks during a mile-run in Brazil and made headlines all over the world.

Launched in 2008, the company sells 40,000 to 50,000 masks a week on average through their online shop and in retailers like Harrods, Next, Sainsbury’s and Asda. Not just this, the masquerade masters have licenses to print masks of the EastEnders crew, Coronation Street, Thunderbirds, Only Fools & Horses, Strictly Come Dancing, Dennis The Menace and even Marilyn Monroe. Only recently, the trio cracked a deal with One Direction and Moshi Monsters for making cut-outs too.

Everyone loves a little laugh with celebrity masks but is there a serious business case there? We put the question to maskateer Chris O’Nyan:

Hi Chris! So how did Mask-arade come about?

Long story! It all started in 1992 when I cut out a photograph of an actor named Peter Bowles from a front cover of a magazine. I put some eye holes in it and held it against my face while looking at the mirror and thought ‘My God! This looks great!’ When I showed it to people, they found it pretty amusing and we would laugh our heads off.

From there on, I made making-masks-out-of-celebrity-magazine-front-covers my party thing. Towards the end of the night, I’d get it out and we’d click a lot of photos and they used to go down a storm.

Cut to 2008, having been in finance most of my working life, I decided I want to do something fun. I got together with Ray and Dean and over a couple of drinks we decided to make a business out of this.

Next step, we made 350 masks of West Bromwich Albion player Kevin Phillips and took them to the last game of the season in Queens Park Rangers in London. We spend around £17 in printing the cut-outs and stapled elastic behind them. We sold all masks in about an hour and a half and made £600! Counting our money we thought, we’re on to something here. We went back, decided to call the company Mask-arade and ourselves the “three maskateers.” We invested £2000 each and got the company off the ground.

How did Dragons’ Den come along then?

Dean saw an advertisement in a local paper to apply for Dragons’ Den. We filled the forms and were invited to Manchester to record an audition. We decided to do a pitch wearing masks of the dragons and the production team fell about laughing looking at us.

There on, we were invited to pitch the business to the dragons on the programme in August 2009. Although they didn’t launch us, seven million people watched the show which was fantastic exposure for us.

You must be gutted to not having got any investment out of them though?

After Dragons’ Den, our website crashed because of the response we got. We rode the crest of the wave for months and in fact, even today people coming us to say, “Oh I saw you on Dragons’ Den.”

How do you market the masks you make?

We love coming up with bizarre ideas to attract attention. A few years back we surprised Dom Joly in Birmingham by making masks of him. We saw him backstage signing autographs and put masks of him on our faces and approached him, he was really surprised. He signed the mask and introduced it in his act on stage.

Then, he ordered more masks for a gig in Shrewsbury. We made 500 of them and put it on every seat in the auditorium. We did a similar thing for John Otway in Leicester Square a couple of weeks ago. It’s a great way of getting the word out and causing a bit of a scene really.

Another way we market the masks is through our private collection of personally-autographed celebrity masks in the warehouse. Each week, we tend to send half a dozen masks to celebrities all over the country. We contact their agents and send them a letter asking them to keep one and sign and return one. We have a pretty high strike rate and have a collection of about 1200 signed celebrity masks that includes George Bush, David Cameron, Lord Sugar, Sir Elton John and more.

How did you crack deals with major retailers?

We courted big retailers from the early days because we knew that it’s a good product that would sell on the high street. We approached high-profile retailers, but they smiled and waved us away because we were a small company. But Clinton Cards gave us our first contract and the rest followed. I’m assuming all these shops have secret shoppers so if one is selling a new product, other tend to follow suit. Now we have all major high street stores knocking on our doors, so it’s great.

How has the Royal Wedding and Queen’s Jubilee celebrations been for the business?

Oh! It’s been tremendous. The masks did splendidly during the Royal Wedding and the Queen’s Jubilee celebrations. It’s also what got us into many high street shops. Also back in March, Prince Harry wore a Wills mask at a mile-Long Run in Brazil.  Harry donning the mask made headlines all over the world, it got so much of coverage in the media, it was fantastic!

What plans do you have for Halloween?

The masks do really well during festive periods. We’ve got a range of Halloween masks and there is the option of getting personalised masks as well, so it’s great. Christmas is around the corner too, so busy times ahead for us. Our party masks are perfect for masquerades during Halloween and we have something for everyone – children, teenagers, students and adults.

But does business only do well in festive seasons?

We’ve been really fortunate that the last few years because we’ve had the Royal Wedding and the Queen’s Jubilee celebrations. Next year will be massive again because we have the One Direction license. They’re the biggest bands at the moment so I’m sure their masks will do really well.

Great! Thanks for your time Chris!

The Interview: Michelle Mone on small business, politics and the nightclub in her house